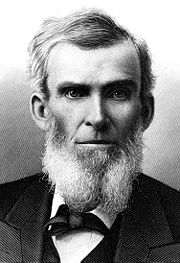 Joseph Riley Smith (born February 6, 1818 at Old Jonesboro; died 1906) was a surgeon, newspaper publisher, merchant and the developer of Smithfield.

Smith was the first child born to founding pioneer John Smith and Sallie Riley Smith, who married in Lincoln County, Tennessee in 1814 and settled near Elyton soon after. He is acknowledged as the third child to have been born to white settlers in Jefferson County, after Moses Fields and William C. Eubank.

The elder smith raised cotton on 2,000 acres along Valley Creek near Elyton, worked by 60 slaves. Joseph attended school at the Union Seminary and then trained under James Kelley, one of Jefferson County's first physicians. He completed his medical studies at the Transylvania Medical College in Lexington, Kentucky in 1841, later attending a course of lectures at New Orleans before returning to Jefferson County as the region's premier surgeon, first at Jonesboro, then at Elyton.

Smith and Baylis E. Grace founded Jefferson County's first newspaper, the Central Alabamian, which continued publication until the close of the Civil War. Smith continued to farm a 600-acre farm near on a portion of his estate near Elyton, with slaves until the War and with hired labor up until the 1880s.

Smith contributed numerous papers to the Western Lancet and New Orleans Medical and Surgical Journal, drawn from rigorous observation of cases examined in the area. He trained other future doctors, including Daniel Davis and organized the Jefferson County Medical Society in 1865. Later he developed a keen personal interest in metaphysics and history. Those studies, "furnished relaxation from his profession as a surgeon before the days of anaesthetics."

Smith retired from the medical profession in 1870 and went into business, opening a mercantile trade at Elyton. He built a new house in the area later to be known as Smithfield and sold off a large amount of former farm land between Birmingham and Elyton. His decision not to allow the North and South Railroad to build across his property influenced the ability of the Elyton Land Company to secure the crossing farther to the east at the future site of Birmingham.

Margaret died in 1875 and, a year later, Smith sought the hand of Mary Smithers Kilpatrick, a woman he had first met while a student in Kentucky and whom he learned had been widowed and was living in St Louis. The two were wed in 1876.

Smith relocated his mercantile business to Birmingham in 1877, and invested his profits in downtown real estate, becoming one of the largest commercial landlords in the new city. In 1879 he constructed a racetrack on a plot he bought from James M. Ware, calling it "Smith's Park", which he later deeded to the city of Birmingham. He also contributed to the establishment of the Birmingham Municipal Auditorium, which was not constructed until 1924.

In 1882 he began developing a suburb on his remaining farmlands, which he named "Smithfield" after himself. Unusually for developers of his time, Smith conducted business directly with African-American purchasers, sometimes lending money on promissory notes in order to make a sale.

Smith was a director of the Birmingham Insurance Company and the Birmingham and Pratt Mines Street Railroad, and a major stockholder of the First National Bank of Birmingham. He donated $5,000 toward the construction of St Vincent's Hospital in 1899.