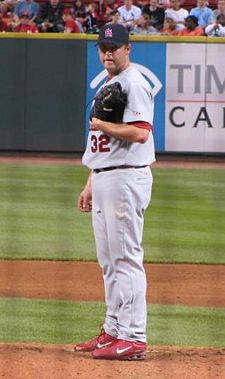 He was born to Shirley Morgan and Dean Hancock in Cleveland, Mississippi. The family moved to Vestavia Hills while he was in school.

In high school, Hancock was a star player for three state champion Vestavia Hills High School teams, finishing his high school career with a 9-0 season and 0.92 ERA. He was named a Mizzuno All-American and was Gatorade's Alabama Player of the Year. He was drafted in the 4th round of the 1996 amateur draft by the Milwaukee Brewers, but enrolled instead at Auburn University, where he played one season.

Auburn went to the 1997 College World Series with Hancock's help. He went 2-0 in 2 starts and made 11 relief appearances, finishing with 32 strikeouts and a 4.75 ERA.

In the 1998 MLB draft he was selected in the 5th round by the Boston Red Sox and signed with the team. He pitched 13.1 innings for the rookie league Gulf Coast Red Sox, striking out 21 batters but allowing 5 runs for a 3.38 ERA. He was promoted to the low-A Lowell Spinners where he went 0-1 with 1 save in 5 appearances.

In 1999 Hancock played a full year with the Augusta GreenJackets of the South Atlantic League, earning a 6-8 record and 3.80 ERA in 25 starts. He moved up to the high-A Sarasota Red Sox and played another full year, going 5-10 with a 4.45 ERA in 24 starts. in 2001 he moved to the AA level with the Trenton Thunder and was successful, going 8-6 in 24 starts with a 3.65 ERA. The next ear he started again at Trenton, starting 14 games before moving to the AAA Pawtucket Red Sox where he went 4-2 in 8 starts with a 3.45 ERA.

Later that season he got his first shot at the big leagues, with three appearances, including one start for Boston. He struck out 6 in 7.1 innings, but allowed 3 runs to score and finished his first season 0-1. After the season he was traded to the Philadelphia Phillies for Jeremy Giambi.

He started the 2003 season at Philadelphia's AAA affiliate, the Scranton/Wilkes-Barre Red Barons. He played there for most of the year, going 10-9 in 27 starts and recording 122 strikeouts in 165.2 innings. He got a second call-up to the majors at the end of the year, recording 4 strikouts in 3 innings of relief for the Phillies.

In 2004 he played most of the season in Scranton again, going 8-7 in 18 starts with a 4.01 ERA. He made 4 appearances for the Phillies, allowing 9 runs in as many innings and adding another loss to his record. He and Andy Machado were traded one day before the deadline to the Cincinnati Reds for Todd Jones and Brad Correll.

On the day he was traded he made his first start for his new team and recorded a win in relief against the Astros in a game that began while Hancock was still officially a Philly and was suspended for weather. He went on to finish the season 5-1 in Cincinnati, earning 9 starts and finishing the year with a 4.45 ERA.

In 2005 Hancock started the season with the Louisville Bats of the International League, starting 8 games and going 1-3 with a 5.93 ERA before rejoining the Reds. He made 11 appearances (but no starts) as a Red in 2005, earning 1 win and an impressive 1.93 ERA in 14 innings of work. His season was hampered by a strained right groin which left him on the disabled list for much of the season. After his return to the lineup he was found to have sprained his ulnar collateral ligament, which kept him off the mound until September.

Hancock was released before the 2006 season for reporting to spring training overweight. He was signed off waivers by the St Louis Cardinals. That season he went 3-3 in 62 regular season appearances. He pitched 77 innings and recorded 29 strikouts, 13 walks, 15 earned runs and an ERA of 4.09. He faced five batter without recording an out during the National League Championship Series. He did play in the World Series, which St Louis won.

Hancock started the 2007 season with an 0-1 record and 3.55 ERA in 8 games. He was late in reporting to a game on April 26 because he had overslept. Two nights later Hancock was killed on Interstate 64 in St Louis when he collided with a tow truck that was assisting a vehicle in the left lane. The medical examiner reported that his blood alcohol level at the time of the crash was 0.157, nearly twice the legal limit. It was also reported that Hancock's mobile phone was being used at the time, and marijuana was found in the vehicle.

Hancock was survived by his parents and stepmother, and three siblings. buried in Kirkville Cemetery in Tupelo. His memorial service was held on May 3, 2007 at Tupelo's First United Methodist Church. Vestavia Hills High School principal Cas McWaters delivered the eulogy and some of his Cardinal teammates served as pallbearers.