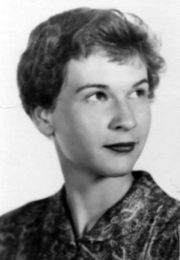 June Fore Shaw (born March 19, 1930 in Montevallo; died July 15, 2014 in Birmingham) was a pathologist and director of the blood bank and tissue-typing laboratory at UAB Hospital.

June was the daughter of Shelby County Sheriff Claude Fore and his wife, Wilna. She eloped at age sixteen and had a daughter, and two more failed marriages, before deciding to enroll in college with the aim of becoming a doctor. She earned her M.D. in 1960 from the University of Alabama College of Medicine and completed residencies in clinical and anatomical pathology. As director of UAB's blood bank and tissue-typing lab she co-founded the American Association for Clinical Histocompatibility Testing.

Shaw was known for her love of short skirts, flashy cars, and the Grateful Dead. She was a member of the National Organization of Woman and campaigned for the Equal Rights Amendment.

Shaw survived a stroke and a battle with pancreatic cancer. She spent her last years at Greenbriar at the Altamont and in hospice care.