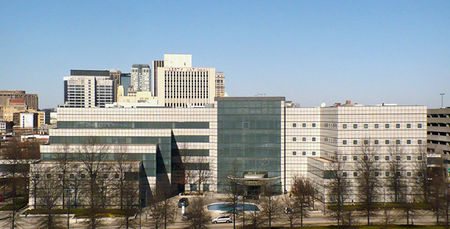 The Kirklin Clinic is an outpatient health clinic housing over 700 physician practices in 35 specialties under the umbrella of the University of Alabama Health Services Foundation (UAHSF). The clinic is named for pioneering UAB heart surgeon John Kirklin, who lobbied for the creation of a unified center for UAHSF's ambulatory care clinics. The 5-story clinic building, dedicated on June 5, 1992, was designed by Pei Cobb Freed & Associates of Boston, Massachusetts.

The clinic is located on Block 173 of Southside (between 5th and 6th Avenues South and between 20th Street and Richard Arrington Jr Boulevard). An adjoining parking deck occupies half a block across Arrington Boulevard and is connected by a pedestrian bridge. Another bridge connects the clinic to UAB Hospital at the UAB 6th Avenue Parking Deck.

Discussion of creating a central clinic building for use by UAHSF physicians began in 1985. A feasibility study completed in 1987 lent impetus to the project. Giattina, Fisher & Company and Porter White & Yardley participated in site selection and development of the master plan. After reviewing the programmatic needs, as catalogued by Chi Systems of Philadelphia, Pennsylvania, the planners recommended a 400,000 square foot building with room to double in size in the future as well as space for ancillary development such as an office building, hotel, and a parking deck to hold several thousand cars.

Efforts to consolidate four blocks of land for the planned clinic were forestalled as negotiations with Mimi Pears and George Sarris failed. The matter went before the Birmingham City Council, which voted 6-3 on October 20, 1987 to allow the city to invoke eminent domain to force a sale. Eventually the design of the clinic was reduced to three blocks, excluding the block between 21st and 22nd Streets and 6th and 7th Avenues South.

Planners noted that Kirklin's vision was for a daringly-designed building that stood out and announced itself as something different than what had come before, while still serving every practical need of the present and foreseeable future. Through Arthur Garikes and Larry Partridge, contact was made with Mike Flynn, partner in I. M. Pei & Partners. That association became the final selection from several associations between local and national firms who presented proposals. The announcement of the architect selected was made on May 31, 1988, just as Kirklin stepped down as head of the UAHSF. Dick Briggs, Jr took his place as shepherd for the project.

Pei's design featured a terraced block with an open courtyard from the very beginning. The courtyard would become the center of a space defined by the architecture and therefore distinct from the rest of the city. As the building stepped up from that space, it would erect walls to hold the street line on the other sides. Another early decision was to use machined, smooth materials on the exterior as a suggestion of the clarity and professionalism of the healthcare practiced by UAHSF, as well as to contrast with the dark brick used elsewhere in the Medical Center.

Pei's son and partner, C. C. Pei, took charge of the design during its development. He worked with City of Birmingham planner Michael Dobbins to accommodate requests from the city to provide ground floor retail (in the parking deck) and to pull the west wall back from 20th Street, providing space for landscaping to continue the Birmingham Green motif into Southside. He then focussed on the clinic's public spaces while local architects organized the various clinical departments around the 10' x 14' modular examination room that the design team had earlier settled on. The public areas were organized in a hierarchy from the light-filled atrium facing the courtyard on the south to smaller waiting areas from which the larger space was still visible. Each waiting area faces a reception desk which acts as the organizing center for its cluster of examining rooms, labs and support areas. Doctors and staff use a separate system of hallways and stairs arrayed around the perimeter of the building.