In December 2000 arson caused extensive damage to the auditorium, destroying approximately $30,000 worth of band instruments which, because of ever-tightening public school budgets, have been only partially replaced. In February 2006, the South East Lake Neighborhood Association voted to appropriate $5,000 of their neighborhood funds to go toward new band instruments. 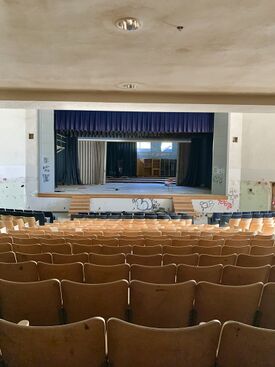 View of the auditorium in 2017. Photo by Austin H. Stone.

In October 2006 the Facilities and Technology Committee of the Birmingham Board of Education heard a recommendation from new superintendent of schools Stan Mims to close Banks and transfer its students to the new Ossie Ware Mitchell Middle School which was built as an elementary school that would have replaced Robinson Elementary School. Students from Banks relocated to their new campus in South East Lake in January 2007.

After the school's closure, the state agreed to turn over the landmark jet to the Southern Museum of Flight, where it was restored to its military colors for display.

Banks' campus was among 14 properties put on the market in early 2008. In February 2009 Mayor Larry Langford proposed developing a pre-kindergarten program in the school in partnership with the Jefferson County Committee For Economic Opportunity.

In 2008 columnist John Archibald reported that student records were left in the school building after it closed and that after she was made aware, interim superintendent Barbara Allen made arrangements to remove them to a secure storage facility. In 2013 real estate agent and Birmingham City Council candidate Richard Rutledge announced that the records remained unsecured. Shortly afterwards school system employees removed them from the vacated building.