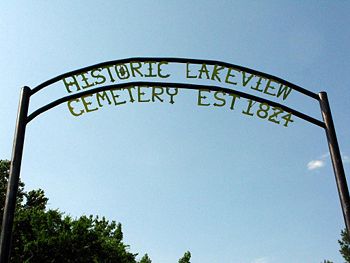 Lakeview Cemetery is a 9-acre, formerly abandoned cemetery located near St John Baptist Church on Alabama State Highway 269 in Edgewater. Many early residents of the Edgewater community are interred there.

The first 3 and a half acres of the cemetery was developed by the Tennessee Coal, Iron and Railroad Company (TCI) in the 1920s and was later turned over to the church, and eventually left neglected as more families bought lots at the more visible George Washington Carver Cemetery.

Members brought it back to the attention of church leaders in 2002. The church then spent three years cleaning up the site and going through the process of having it listed in the Alabama Historic Cemetery Register. They also secured additional land from U. S. Steel to reopen it as an active, non profit cemetery.

A dedication for the restored site was held on January 20, 2008. A welding class at Minor High School constructed an arched entrance gate. A historical marker was also placed on the site.