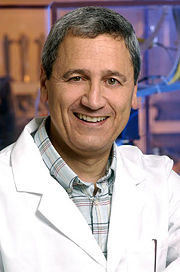 Lawrence James DeLucas (born July 11, 1950 in Syracuse, New York) is a UAB scientist and NASA's first civilian scientist-astronaut. His research specialty is automating protein crystallization for phramaceutical research. He has co-authored 2 books and over 100 peer-reviewed articles and has been granted numerous patents in that field.

He was the Payload Specialist on the 1992 U. S. Microgravity Laboratory (Space Shuttle Mission STS-50) under Commander Dick Richards. He worked aboard the Columbia conducting 720 experiments for two weeks (the longest Shuttle mission to that date), travelling over 5.7 million miles in 221 orbits. He later served as Chief Scientist for the International Space Station from 1994-95. When the Columbia burned up on re-rentry in 2003 it was carrying several pharmacological experiments from DeLucas' group at the Center for Biophysical Sciences.

He is currently the Director of the Center for Biophysical Sciences and Engineering at UAB's School of Optometry and Director of the X-ray Core Facility at UAB's Comprehensive Cancer Center. 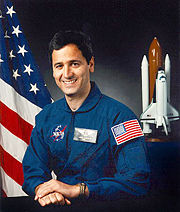 DeLucas attended UAB and earned his first Bachelor's degree, in Chemistry, in 1972. He went on to earn his Master in Chemistry (1974), after which he worked for a year at UAB's Institute of Dental Research. He earned a second B.S. in Physiological Optics (1979), and two Doctoral Degrees in Optometry (1981) and Biochemistry (1982). From 1986-92 he was the Associate Director of UAB's Center for Macromolecular Crystallography. He is a member of UAB's Research Foundation and Technology Transfer Committee and serves on the Media Relations Group for the University.

He currently serves on NASA's Space Station Science Utilization and Advisory Subcommittee, on the advisory committee of Huntsville's U. S. Space and Rocket Center, on the executive committee of the Helen Keller Eye Research Foundation, the Council of Biotechnology Centers Board, and is President of the Alabama State Biotechnology Association Board of Directors. He also serves on the Japanese Space Agency Science Advisory Board. In 1995 he co-founded Diversified Scientific, a company that manufactures and markets products, such as the "Intelligent Crystallization Platform," based on UAB research conducted at the Center for Biophysical Sciences and Engineering. Diversified Scientific was one of the first companies to graduate from UAB's Office for the Advancement of Developing Industries.

He has been honored with several honorary doctorates as well as NASA's Public Service Medal and Brazil's "Order of the Rio Branco". He has been inducted into the National Optometry Hall of Fame, and the Sunday Times of London included him as one of 18 scientists who will have a major impact on the 21st century. In 2013 he was honored with the Odessa Woolfolk Community Service Award.

DeLucas is married to the former Katherine Elizabeth Gester and has three children. His recreational interests include basketball, scuba diving, model airplanes, astronomy and reading.