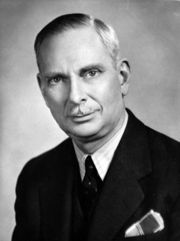 Lee Bidgood (born February 2, 1884 in Norfolk County, Virginia; died May 1, 1963 in Deland, Florida) was the first dean of the College of Commerce and Business Administration at the University of Alabama and served as interim president of the university in 1953.

Bidgood attended Churchland Academy and earned bachelor's and master's degrees from the University of Virginia in 1905 and 1906. He taught at the Virginia State Normal School in Farmville for three years, then accepted a fellowship to conduct graduate research at the University of Wisconsin. He was appointed to the economics faculty of the University of Alabama in 1913 and lobbied President George Denny and the University of Alabama Board of Trustees to create a school of business. In 1920 he was given a $7,000 budget, one instructor, one classroom and two student assistants to begin the program. In 1928 the school got its own building, now called Bidgood Hall in his honor. A year later it became the first school in Alabama to be accredited by the American Association of Collegiate Schools of Business.

Bidgood married the former Emily Smith in 1914 and had four children. He died in 1963 and is buried at Tuscaloosa Memorial Park. He was inducted into the Alabama Business Hall of Fame in 1977.