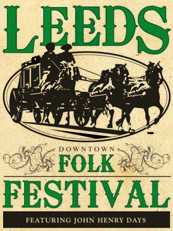 The Leeds Downtown Folk Festival and John Henry Celebration is an annual festival inaugurated in September 2008 by the Leeds Area Chamber of Commerce. The festival features artisans working in booths along Parkway Drive in downtown Leeds. It also features storytellers, traditional music, and a tribute to John Henry near the Leeds Railroad Depot. The organizers put on John Henry Days in 2007 and expanded it into the Folk Festival the following year.