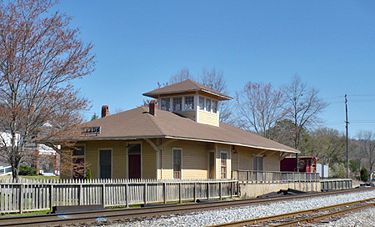 The Leeds Railroad Depot is a depot built in Leeds in 1884 by the Richmond & Danville Company for the Georgia-Pacific Railway. It is located at 933 Thornton Avenue Northeast adjacent to what is now the Norfolk-Southern Railroad, but is no longer used as a depot.

Most of the streets in downtown Leeds were laid out by an engineer for the Cahaba Valley Land Company using the depot as the center of a 1-mile radius.

The structure is now owned by the city, which restored it in 1984 with the assistance of Kidd/Plosser/Sprague Architects. It was added to the National Register of Historic Places that same year. A Southern Railway X245 caboose, also owned by the city, is parked adjacent to the depot.

The depot has been used as the offices of the Leeds Chamber of Commerce until he Chamber built a new office on Parkway Drive. It is still used for public meetings, including those of the Leeds Historical Society and the Mid-South Chapter of the Railway & Locomotive Society.

The Historical Society and Leeds Scenic Byway management team partnered to landscape the grounds around the building in preparation for the Leeds Folk Festival and John Henry Days in 2008. Adamsville resident Robbie Plemmons donated some of her late husband's collection of train memorabilia, including silverware and china used on Southern Railway dining cars and the safe from the Birmingham Terminal Station to be displayed at the depot.