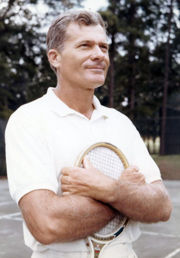 Leslie Clark Longshore, Jr (born April 5, 1925 in Anniston; died September 6, 2013) was a professional tennis player, coach, umpire, English teacher and distance runner. He was a cofounder of the Southern Professional Tennis Association and the Birmingham Track Club. He ran in every Vulcan Run marathon and completed 37 marathons, the last in 2002 at age 76.

Longshore grew up in Anniston and graduated from Anniston High School in 1942. He completed a bachelor's degree at Tulane University in New Orleans, Louisiana and a master's at the University of Alabama. A star tennis player, Longshore won the Southeastern Conference's singles and doubles championships in 1946 and competed in 8 consecutive U.S. National Championship tournaments at Forest Hills, New York between 1952 and 1959, reaching the round of 16 in 1958. He lobbied to expand the tournament to include professional tennis players, helping popularize what became known as the "U. S. Open" after 1968.

Longshore coached at the Mountain Brook Swim & Tennis Club, Highland Racquet Club, and later at Clemson University in Greenville, South Carolina from 1958 to 1962 and at Samford University from 1974 to 1986. As an educator, Longshore taught English and Latin at Clemson and also taught at the University of Alabama, Birmingham-Southern College, UAB and John Carroll Catholic High School.

Also in the 1970s, Longshore took up running and helped found the Birmingham Track Club which organized the Vulcan Run. He married his wife, Ann on the evening before the 1982 Vulcan Run and had his best time the next day. He regularly competed in both the 10K and marathon races on consecutive days and was the oldest finisher in 1993, 1994 and 1995.