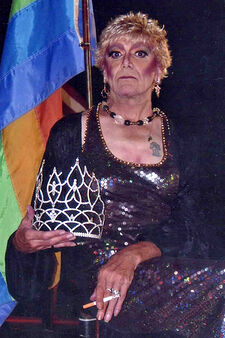 Simoneau was born in New Hampshire and spend several years of childhood in Blackpool, England. After returning to the US to live with his grandparents he graduated from Nashua Senior High School. He served in the U.S. Navy for six years. After leaving the service he moved to Portland, Oregon where he lived as Ramona Simmons and earned a bachelor's degree in journalism from Portland State University. He wrote for The Northwest Fountain while performing in drag shows at Dahl & Penney's Show Lounge.

Simoneau worked in San Francisco, Boston, Baltimore and New Orleans under various stage names before settling coming to Birmingham in 1985 to manage the Steak & Egg Kitchen on 10th Avenue South.

He first used "Libertee Belle" as a pen name when contributing gossip columns to the Alabama Forum, while also writing news stories as R. M. Simoneau and as Sean Robert Michaels. Belle was also a frequent caller to talk-radio programs hosted by Russ and Dee Fine, Paul Finebaum and Matt Murphy. She once ran for Birmingham City Council.

Belle teamed on stage with Georgetta Burns to form the "Dynamic Duo of Destruction". She appeared at numerous fund-raising events, public meetings and demonstrations. Simoneau was one of the founding board members for Central Alabama Pride and appeared in drag in every gay pride parade, usually bringing up the rear. In 2014 Libertee Belle was named grand marshal.