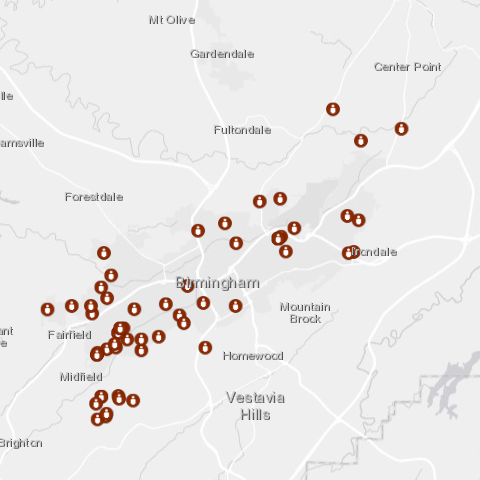 Map of Birmingham homicides in 2010

This is a List of Birmingham homicides in 2010. It includes homicide cases occuring within the city limits during the calendar year. Note that a "homicide" refers to the cause of death as determined by a medical examiner, not to the commission of the crime of murder as charged by police and prosecutors.

Of the 64 reported homicides, suspects have been identified in 44 cases, apprehended in 44, and charged in 35. Convictions were obtained in 13 cases, 5 by plea and 8 by jury trial. Charges were dismissed before one capital case went to trial. Another prosecution ended in mistrial.

Three homicides were ruled justifiable by prosecutors, one resulted from an incident that happened in the year prior, and one was the result of negligence. Two others, caused by reckless driving rather than malice aforethought, were charged as homicide, but not murder. Not counting those, the police department acknowledges 57 murders in its tabulation for the year, of which 20 remained unsolved by year's end.

At least 48 of the 64 reported homicides were shootings; three were stabbings; four resulted from beatings; and two from vehicular collisions. Ten cases appeared to be domestic disputes, and three were the result of child abuse. Robbery appeared to be the motive in 5 cases, fleeing from police pursuit caused another, and one resulted from an attempt to break up a fight. Police Chief A. C. Roper estimates that about 35 to 40 percent of the city's homicides are drug-related. In about 3/4ths of homicides the victim and perpetrator were previously acquainted.

27 incidents took place on the streets, 1 in a park, 3 in parking lots, 6 inside businesses, 3 at apartment complexes and 23 at homes or apartments. 52 victims were males and 12 were females.

A "March Against Violence" was organized on July 29 by Brenda Ward, mother of Ra'Sheed Ward, who was killed on June 17. The day would have been Ra'Sheed's 20th birthday. Approximately 55 people participated in the demonstration which began at Marino's Associated Foods on Bessemer Road and proceeded down Terrace S in Ensley.