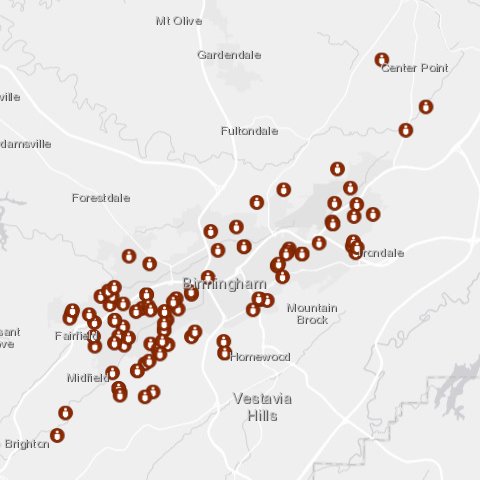 Map of Birmingham homicides in 2017

This is a List of Birmingham homicides in 2017. It includes homicide cases occurring within the city limits during the calendar year. Note that a "homicide" refers to the cause of death as determined by a medical examiner, not to the commission of the crime of murder as charged by police and prosecutors.

Of the 117 reported homicides, two were police-involved shootings, 7 were ruled justifiable by prosecutors, and two were determined to be self defense by a judge, leading to the dismissal of charges. In four homicide cases murder charges were filed against an accomplice. Three other deaths in 2017 resulted from violent incidents that occurred in previous years, and six resulted from reckless driving. The police department therefore acknowledges 97 chargeable homicides, 3 of which were charged as manslaughter and the remaining 94 considered murders. Suspects have been identified in 61 cases, apprehended in 57, and charged in 53 (including six cases where charges were later dismissed). On December 27, the Police Department reported having closed 55 of 110 homicide cases, a rate of 50%. The biggest obstacle to solving more cases was said to be the unwillingness of witnesses to come forward with information and to testify in court.

So far convictions for murder have been obtained in 7 cases. One murderer committed suicide at the scene. Six defendants pleaded guilty to lesser charges, and five more were acquitted at trial. Charges in four deaths were dismissed.

101 deaths resulted from shootings, four were caused by stabbing, six from auto collisions, one from blunt force trauma, and four resulted from unnamed causes. At least 54 incidents occurred on the streets, 38 at private homes, 11 at businesses, and 12 at apartment complexes. Sixty-two were reported in the West Precinct, 27 in the East Precinct, 13 in the South Precinct and 14 in the North Precinct. Thirteen deaths began as domestic arguments, two resulted from abuse of children, twelve arose from ongoing grudges, five victims were killed by stray bullets, fourteen resulted from sudden arguments, six murders took place during attempted robberies, two resulted from armed standoffs with police, six were caused by reckless driving, and the motive is unknown in 56 other cases. Ninety-seven victims were male and nineteen were female. One was an unborn child.

Numerous city officials gathered at Wiggins Park on February 13 to announce a series of "community conversations" to engage with at-risk youth and identify factors that would help them to avoid violence and then to develop an action plan for the city and its partners. Council member Jay Roberson explained that, "It is my belief that every time a youth pulls a trigger, it's a cry for help. It's time we start listening to all those cries." In addition to supporting the efforts of positive role models in the community, Mayor William Bell also said that the city would try to work more closely with the U.S. Drug Enforcement Agency and the U.S. Bureau of Alcohol, Tobacco and Firearms to stem the flow of black market drugs and guns into the city.

A vigil was held at W. C. Patton Park following the deaths of Montel Glenn and Randall Brown in Bush Hills. An "Angel Toy Drive" sponsored by the Black Magic Project and coordinated by Eric Hall distributed Christmas presents to 150 children of homicide victims at an event at Boutwell Auditorium.