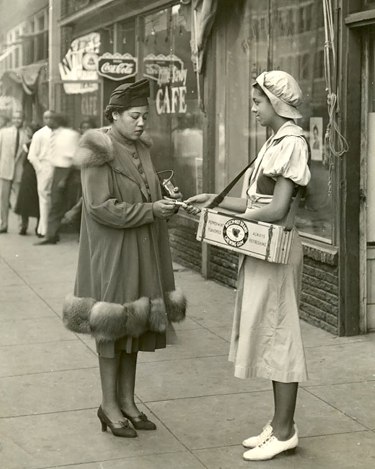 The business was owned by Bob Williams, who moved to Birmingham from New York City in 1932. After working a few years at the Elks' Lodge, he partnered with Alvin Alexander to open a cafe specializing in late-night fried chicken in 1937. He drew on the fame of Harlem's Savoy Ballroom for the name of the new venture. The business was not immediately successful, and Williams borrowed money from a friend, Birmingham Fire Department Chief Alf Brown, to reopen.

The reopened Cafe was a success. During the 1940s and 1950s Oliver Marcus managed the business and the head chef was A. B. Bettis. The upstairs restaurant served chicken and steaks, along with dinner specials and short orders. The bar downstairs was a gathering place for many of the African-American elite, including musicians, Birmingham Black Barons players, and out-of-town visitors. The business grossed $125,000 in 1948.

In 1944 the waitresses at Bob's Savoy formed their own social and savings club. One employee, known as "Messy Bessie," operated a side business from the back door of Bob's Savoy, procuring hard-to-find goods for customers in the know.

Nightly band performances went on until the early hours of the morning. Nationally-known performers booked at larger ballrooms in the city would often stop by the Little Savoy to play for smaller crowds. A few of those included Count Basie, Duke Ellington, Lionel Hampton and Cab Calloway. Joe Louis and Jackie Robinson were some of the visiting stars who frequented the club. Local luminaries like Kitty Cat Mays and, later, his son Willie were regulars. Generally the upper floor, which was reserved for wealthier and more important customers and visitors, hosted those performances. Occasionally concerts would be held at Bob's Savoy for white audiences, with black customers required to stay downstairs due to Birmingham's segregation ordinances.

Williams was an early proponent of ending segregation and helped to raise a defense fund to challenge Birmingham's race-based zoning laws. The club suffered $25,000 in damages from a fire in May 1951. The cause was not determined. A second fire in 1958 forced the business to close.

Williams went on to operate nightclubs in Detroit, Michigan and Philadelphia, Pennsylvania, and later opened a hotel in Monrovia, Liberia. In 1964 Williams put on a show in Monrovia that brought together several musicians who had been regulars at the Little Savoy, including Newman Terrell, Melvin Caswell, and Walter Miller.

The site is now used for parking for the Hugo L. Black Federal Courthouse.

The Taste of 4th Avenue Jazz Festival features a re-creation of the Little Savoy.