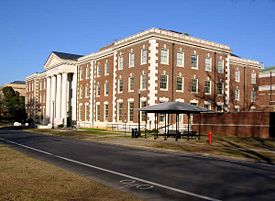 View from 6th Avenue in December 2009

Lloyd Hall (Building #1039) was constructed in 1927 as the home of the chemistry department at the University of Alabama.

An addition to the rear of the building was completed in the 1960s.

In 2006 the University began the first of four phases of renovations to the building which was converted for general academic use as chemistry classes moved to the new Shelby Hall.