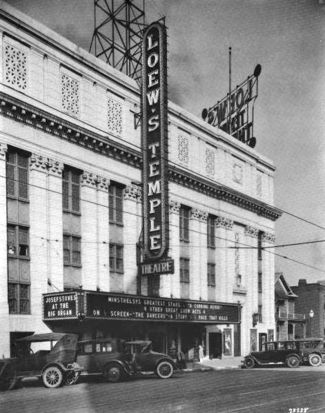 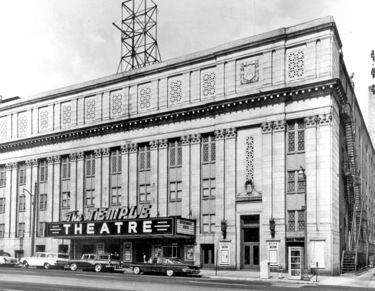 'The Temple Theatre, also known as Loew's Temple Theatre was a vaudeville and motion picture theater located inside the Masonic Temple on the Southeast corner of 19th Street and 6th Avenue North with its entrance at 517 19th Street. Construction of the building began in 1921, with President Warren Harding present for the laying of the cornerstone. It was built by the Smallman-Brice Company, and opened in 1922.

The Temple's 3,100-seat auditorium, designed for Zamora Shrine ceremonies, was used to screen films as early as December 1923 when a revival of D. W. Griffith's "Birth of a Nation" had an extended run. In May 1924 its screenings of "The Great White Way" and "Between Friends" were accompanied by the 20-piece Temple Symphony Orchestra, conducted by Fred Stark.

The venue was converted into a Vaudeville theater in 1925. The Birmingham Amusement Company was formed with Loew's Inc. as majority shareholder. The local investors were R. A. Brown and Erskine Ramsey, who jointly held 35 percent of the stock. The new program added a stop on Loew's circuit between Atlanta and Memphis, which alternated with large meetings, "legitimate" theatrical productions, and concerts. Loew's Temple Theatre opened on April 27, 1925. Motion pictures were screened there beginning in 1928. In September 1928 Loew's Inc. announced that it could not advance more investment capital to the Birmingham Amusement Company and that Loew's Temple Theater would be closed on the 15th of that month as a result. The city lost its stop on the Loew's Vaudeville circuit while the Empire Theater on 3rd Avenue North reopened on October 1 to begin showing Metro-Goldwyn-Meyer pictures on a first-run basis.

The theater continued to function without a regular program. The Minneapolis Symphony performed at the Temple Theater in 1933, with the performance recorded for broadcast. On February 12, 1944 Bela Lugosi appeared on the stage for two performances of "Arsenic and Old Lace".

A touring production of "South Pacific" brought controversy when city leaders learned that some members of the chorus were African American. A performance would violate the city's segregation laws. Challenged by Commissioner of Public Safety Bull Connor, the producers refused to change the cast, offering instead to cancel the engagement all together. After consideration, Connor determined that the performers in question were Cubans rather than "Negroes", and permitted the show to go on.

Tallulah Bankhead appeared several times on the Temple stage in productions ranging from Lillian Hellman's "The Little Foxes" to Noel Coward's "Private Lives". The Temple Theater served as the home of the Birmingham Civic Opera and the Birmingham Symphony Orchestra.

The building was demolished in September 1970 by the First National Bank of Birmingham and used for parking until the construction of the AmSouth-Harbert Plaza. Five chandeliers from the theater were saved and donated to Samford University for use in the new Leslie S. Wright Performing Arts Center. Bryant Electric restored and installed the fixtures at the behest of Dr and Mrs Thomas Thuss.