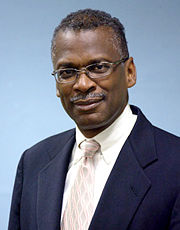 Johnson is the son of a truck driver and part-time nurse's aide from Mobile. He was interested in taking things apart and building new toys as a child and was later inspired by stories about George Washington Carver. He attended Williamson High School in Mobile, where he won a statewide science fair at the University of Alabama with a home-built remote-control robot called "Linex". He earned a mathematics scholarship to Tuskegee University, earning a bachelors in mechanical engineering in 1973 and a masters in nuclear engineering in 1975.

After graduating, Johnson worked at the Savannah River National Laboratory where he analyzed thermal characteristics of plutonium fuel spheres. He later worked on cooling system designs for the Oak Ridge National Laboratory before being assigned to the Air Force Weapons Laboratory in Albuquerque, New Mexico as Acting Chief of the Space Nuclear Power Safety Section.

Johnson left the Air Force for a job at NASA's Jet Propulsion Laboratory in Pasadena, California. There he worked on the Galileo Mission to Jupiter. He rejoined the military with the Strategic Air Command in Bellevue, Nebraska and transferred to their Test and Evaluation Squadron at Edwards Air Force Base in California, working on the stealth bomber. He returned to NASA to work on the Mars Observer and Saturn Cassini missions, and for the Kraft mission to study asteroids.

Johnson's project to develop a water-based heat pump (the "Johnson Tube") led indirectly to the invention of the compressed air-powered water gun which was patented in 1991 and marketed by Larimi Toys as the "Super Soaker", which has sold over 200 million units.

With his royalties from the Super Soaker and other toys (including Nerf products), Johnson opened his own laboratory, Johnson Research & Development, in Marietta, Georgia. He continues to develop toys, but is also working on a high-capacity battery (the Excellatron) and a method for efficiently converting heat energy into electricity (the Johnson Thermo-Electrochemical Converter).

Johnson was inducted into the Alabama Business Hall of Fame in 2020.