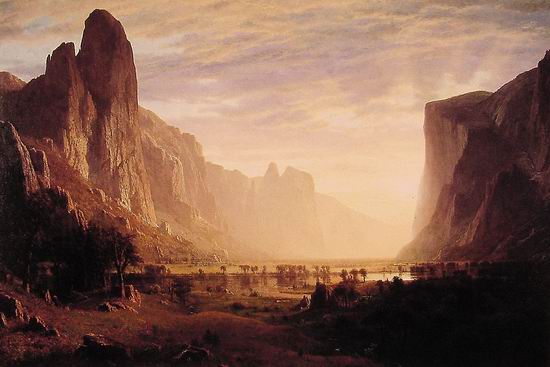 "Looking Down Yosemite Valley, California" (1865) is a monumental oil painting by Albert Bierstadt that is among the most notable and popular works in the permanent collection of the Birmingham Museum of Art.

The painting was completed in 1865 following Bierstadt's travels in the western United States in 1859 and 1863. It was first shown, in the "position of honor", in that year's exhibition of the National Academy of Design in New York. It toured with Bierstadt to Philadelphia, Milwaukee, and Cincinnati the following year,

The 64" tall by 96¼" wide canvas, with its heavy walnut frame, was purchased for $20,000 in December 1865 by Uranus H. Crosby, a Chicago distiller. At the time it was the largest sum ever paid for an artwork by a living American artist. Crosby displayed the painting at his Crosby Opera House, a landmark in the city's booming cultural scene. When his spendthrift habits threatened to ruin him financially, he offered the painting as second prize in a lottery for the deed to the Opera House.

The drawing, originally scheduled for October 1, 1866, was postponed to January 21, 1867. Whether by design or not, the 2nd place ticket went unsold. Crosby made enough off the lottery to buy the Opera House back from the winner for $200,000 and to collect a profit of $650,000, which allowed him to settle his remaining debts.

The curator of Crosby's collection, James F. Aitken, rescued "Looking Down Yosemite Valley," and fifty other paintings, from the great Chicago fire of October 1871 which destroyed the Opera House. The rescued portion of the collection was exhibited in Boston, apparently as part of a fund-raising tour for helping Chicago rebuild. The collection returned to Chicago in late 1871 or 1872 and was loaned to the Chicago Fine Art Institute in from 1873 to 1875 and to the Chicago Art Institute in 1885 and 1887.

Uranus Crosby's older cousin, Albert, took possession of the painting afterward and displayed it in a well-stocked art gallery at "Tawasentha", a sprawling mansion that he built around his family's old house in Brewster, Cape Cod as a place for his second wife, Matilda, a former burlesque performer, to entertain. There it was likely viewed by such illustrious visitors as Mark Twain and Prince Albert of Monaco.

It was also viewed, by chance, by an Illinois state senator and judge who was involved in identifying Albert Crosby's assets on behalf of creditors. He had not made the connection when friends brought him to Brewster to visit the famed picture gallery during a vacation stay. Since he was familiar with the Bierstadt from its former place of honor in Crosby's Opera House he immediately identified the sought-for assets. Arrangements were made to bring the art collection back to Illinois to be auctioned off, but Crosby argued successfully in court that he had transferred ownership of all his assets to his wife. After Albert's death in 1906 Matilda opened the gallery to the public once a week. When she died in 1928 her grandnieces inherited the estate. They unloaded most of the house's contents at a public sale, and it was there that Anna Friecz acquired "Looking Down Yosemite Valley", in its original frame, for $200.

Mrs Friecz's husband was employed by the Tennessee Coal, Iron & Railroad Company and had been transferred to Birmingham. She paid another $100 to freight the work to their home. They donated the painting to the Birmingham Public Library with the stipulation that it be insured for $15,000. It hung in the Library's literature department, darkened by age. Though it was known locally, the broader art community was unaware of the fate of the monumental painting.

In 1974 Edward Weeks, curator of painting and sculpture at the Birmingham Museum of Art, suggested a conservation cleaning. After cleaning it was loaned indefinitely to the Museum, and made a permanent gift in 1991.

In September 2001 the American Art Galleries were reopened with in a new format designed by curators David Moos and Anne Forschler that combines fine and decorative arts and features Alabama-made objects of the period between the American Revolution and the mid 1920s. Looking Down Yosemite Valley, California was given a new place of honor at the entrance to the 6000 square foot gallery, terminating the view down the main first floor hallway.

A similar but much smaller version of this scene was painted in 1864, probably as a sketch for this painting. It hangs in the Museum of Fine Arts in Boston and was used on a United States postage stamp honoring the painter.