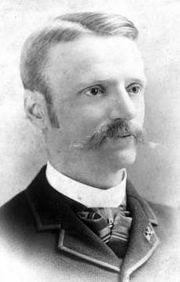 Clark was the youngest of eight children born to Francis B. and Helen (Shepherd) Clark. The family moved to Mobile when he was an infant. His father, a railroad executive, left home to volunteer with the Confederate army during the Civil War, but returned safely and served as chairman of the Mobile & Ohio Railroad and later president of the Mobile & Alabama Grand Trunk Railroad, both of which were acquired by the Southern Railway.

Louis Clark was educated in private schools in Mobile and earned his bachelor's degree at the University of Alabama in 1885. While at the university, he served as Captain of Company E, Tuscaloosa Cadets, and led his fellow cadets to first honors in a drill competition at the New Orleans Cotton Centennial Exposition in his senior year.

Clark set aside plans to study medicine and instead became editor, manager and part owner of the Mountain Eagle newspaper in Jasper. He soon moved to booming Birmingham and invested in real estate. He reorganized the Jefferson Volunteers on April 27, 1887, outfitting the company in a style that earned them the nickname "The Alabama Zouaves" before they were formally enrolled into the state militia as the 2nd Regiment, Alabama State Troops.

Clark's regiment consisted of twelve infantry companies, two cavalry troops, and an artillery battery. The unit was charged with preserving public order, and often employed to suppress labor unrest in the Birmingham District, such as during the 1894 miner's strike. The regiment was also activated during the riot that followed the arrest of Richard Hawes for the murders of his wife and daughters in 1888. During the Spanish American War the Jefferson Volunteers were under the command of Hughes Kennedy. Another company, made up from volunteers from Pratt City and Talladega, was enrolled as Company M of the 1st Regiment, Alabama Volunteer Infantry, officially dubbed the "Bowie Volunteers," but almost unanimously referred to as the Clark Rifles for Clark's hand in assembling the group.

Clark succeeded Thomas Jones as Colonel of the 2nd Alabama State Troops Regiment when Jones was sworn in as Governor of Alabama, and was promoted to Brigadier General in 1897 by Governor Joseph Johnston. Clark oversaw the use of state troops to suppress labor unrest in the Birmingham District, and was proud that his forces had neither taken nor sacrificed a life under his command. He also headed a column of 800 cavalry in a Birmingham parade to celebrate the election of Grover Cleveland in 1892, and marched behind President Teddy Roosevelt in the dedicatory parade opening the 1904 Louisiana Purchase Exposition in St Louis, where Vulcan represented Birmingham. General Clark retired from his commission as head of the Alabama National Guard in 1915.

He developed the Clark Building on 20th Street North in 1908 and the Lyric Theater and office building on 3rd Avenue North in 1914, as well as the Capital Park Inn in Montgomery.

He married the former Mildred Jones of Selma on December 20, 1893. She bore him one daughter, Augusta Carlisle, but left him a widower in July 1897. Clark completed construction of a country estate, "Matsuyama", near Chalkville in 1912. He later sold the property to the State of Alabama, which opened the Alabama State Training School for Girls there in 1937. In 1914 he purchased the former Otto Marx residence on Highland Avenue.

Clark was one of the founders of the Birmingham Little Theater in 1927 and helped develop their theater building across the street from his house at Caldwell Park. His daughter donated the building to the University of Alabama Birmingham Extension Center in 1954 and it was known as the "Clark Memorial Theater" until 1999.

Clark died in 1934 and is buried at Elmwood Cemetery.