Loveman's was a Birmingham-based chain of department stores with locations across Alabama which operated from 1887 to 1980. Relatives of the Loveman family also started stores in Chattanooga and Nashville, Tennessee, so the local chain was known as Loveman's of Alabama to distinguish it from the other stores. 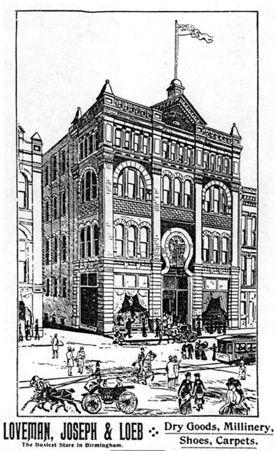 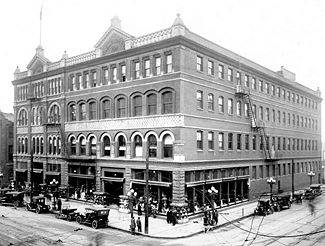 A. B. Loveman, a Jewish immigrant from Hungary, opened his first general merchandise store in Greensboro in the late 1860s. In 1887 he relocated to Birmingham and opened A. B. Loveman's Dry Goods Emporium at 1915 2nd Avenue North. He was soon joined by Moses Joseph of Selma and the store became Loveman & Joseph. In 1889, with the addition of Emil Loeb, the company became Loveman, Joseph, & Loeb.

Loveman, Joseph, & Loeb constructed a large new department store in 1890 facing 19th Street between 2nd and 3rd Avenue North. The store was expanded in 1899. By 1911, Loveman's was known as the largest, most magnificant department store south of the Ohio River. It advertised over 60 individual departments and served as a state textbook depository.

In 1912 the company hired the New York firm of Starrett & van Vleck, along with local associate William Weston to renovate the exterior of the building with terra-cotta facings. That project was set aside. In 1917 Starrett & van Vleck designed an addition known as the Loveman's Annex on 3rd Avenue North, behind the main store and abutting the site later occupied by the Alabama Theatre. The previously-planned renovations to the main building were then undertaking, with the roofline "streamlined" by replacing the old pediments with a continuous flat cornice.

In 1923, after Loveman's son Joseph took over the company, a majority ownership stake was acquired by the newly-formed City Stores Company of Philadelphia, Pennsylvania (now CSS, Inc.). The holding company also took control of New Orleans, Louisiana's Maison Blanche Co. and Memphis, Tennessee's B. Lowenstein, Inc. It serviced all of its stores through a central buyer, but operations were kept under the local control of the individual chains.

The downtown store was destroyed in a massive fire which started in the sub-basement on March 10, 1934, sparing only the exterior of the Annex. The store reopened within a few weeks at a temporary location in the former Parisian building a block away while a new Loveman's building was built on the site of the fire. Material salvaged from the demolished building was used by the Civil Works Administration to begin construction of municipal shops near the Birmingham City Jail.

The new store, completed in 1935, featured a bold, clean art-deco style. A clock on the corner of 19th Street and 3rd Avenue became a popular landmark and meeting place. The new store was one of the first in the United States to be fully air conditioned and the first in Alabama to have an escalator. Seven additional escalators were added, connecting every floor, in 1955.

Comptroller Orville Schanbacher was named president of the company in 1947. In June 1949 Loveman's opened a new "store for the home" facing 2nd Avenue North, connected to the 2nd, 3rd and 4th floors of the main store by a bridge over the alley. Other stores opened in Bessemer and Montgomery. During the 1950s and 60s, Loveman's held a popular "Breakfast with Santa" promotion in their tea room during the Christmas shopping season. Santa was portrayed by radio host Dave Campbell, assisted by diminutive Loveman's bookkeeper Del "Twinkles" Chambordon playing the accordion in elf costume. Cousin Cliff Holman would also make appearances. 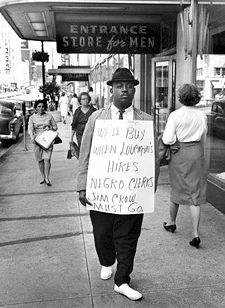 A protester at Loveman's in the early 1960s courtesy BPL Archives

During the Civil Rights Movement, Loveman's was one of the many downtown stores picketed to promote the hiring of more African American clerks. The store was also targeted by a terrorist who detonated a gas bomb in the building on August 15, 1963, sending 22 people to area hospitals. Under president John Breyer the retailer completed a major remodeling of its downtown store in 1969 and added a 400-space parking deck in 1970.

Breyer also extended the store to new locations at West Lake Mall and Western Hills Mall in 1969 and 1970, respectively. Another Century Plaza location debuted in 1976. Its opening was marked by a balloon launch and the slogan, "a whole lotta store!", which was adopted by the entire chain until complaints from school teachers led to a change. Other stores were located in Huntsville and Montgomery.

Loveman's parent, the City Stores Company, filed for Title XI bankruptcy in 1979 and sought a buyer to take control of the Loveman's chain as a whole. Sharp rises in prime lending rates and uncertainty about the wider economy left that effort fruitless. On April 2, 1980 President Jerry Sklar announced that all stores would close that week. The last day of regular business was Saturday, April 5, and the store closed for good on May 29 following a final clearance sale. The firm's 700 employees, 500 of which worked in the Birmingham area, were let go with modest severance packages based on tenure.

The Century Plaza and Western Hills Mall locations, complete with their inventories, were purchased by rival Pizitz and reopened within weeks (opening the way for Pizitz' departure from Eastwood Mall). Four other locations (downtown, Bessemer, Montgomery and Huntsville) held liquidation sales at the end of April. The Birmingham Public Library board evaluated the possibility of taking over the downtown store for a new central library.

The 1935 Loveman's building downtown was renovated in 1998 as the home of the McWane Science Center. 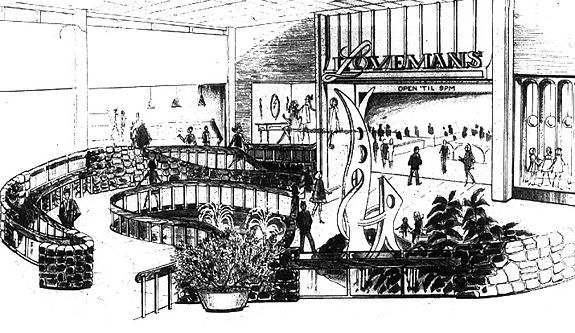 Rendering of the Western Hills Mall location of Loveman's