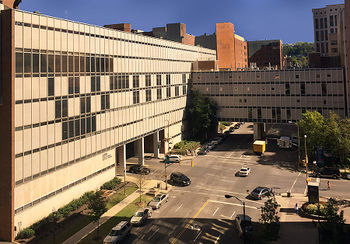 West side of the Lyons Harrison Research Building

The exterior curtain wall of the "bridge" wing originally contained uniform opaque panels with short clerestory windows above, but some of those panels have been replaced with glass. The building was dedicated originally as the Health Sciences Research Building on December 9, 1960 and renamed on November 19, 1966 to honor the late Champ Lyons and Tinsley Harrison.

A 1969 addition of 116,000 square feet for cardiovascular research was built for $5.4 million. The addition was designed by Davis, Speake and Associates.

In 2020 the University of Alabama Board of Trustees approved the development of plans to renovate and expand the Lyons Harrison Research Building into the 145,000 square-foot Altec / Styslinger Genomic Medicine and Data Sciences Building. The plan, budgeted at $78 million, includes demolishing the adjacent Pittman Center for Advanced Medical Studies Building and the Kracke Building and constructing a conference center for the new Marnix E. Heersink Institute for Biomedical Innovation.

The project was funded in part by a gift from the Altec Styslinger Foundation, along with $5 million pledges from the City of Birmingham and Jefferson County. The system was also awarded $50 million in state funding. Ground was broken for the project on April 11, 2022 and the building is expected to open in 2024.