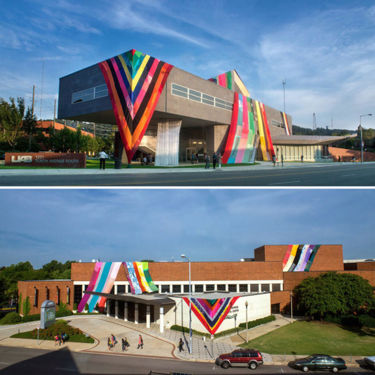 "Magic Chromacity" was a temporary fabric installation on the exterior of the Abroms-Engel Institute for the Visual Arts and the Alys Stephens Center on 10th Avenue South.

The work was designed by Brooklyn, New York-based artist Amanda Browder as a way of "weaving the two buildings together". It was assembled from material donated by individuals from Birmingham and Brooklyn. Doug Baulos contributed a long strip of hand-dyed indigo fabric.

The fabric sections were laid out on the floor of the AEIVA and arranged by Browder before being sewn together by a team of UAB staff and volunteers, including the Bib and Tucker sewing cooperative. Volunteers also helped to install the work on August 25-26, 2014. It was set to remain on view through September 6, but the threat of heavy rains and storms led the College of Arts and Sciences to begin removing it on September 3.