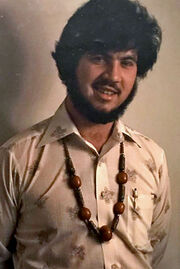 McRae was one of four children born to Francis and Jane McRae. His father was an employee of Stockham Valve & Fitting Co. and his mother was an aviator and school librarian. His great-grandfather was Robert Greene Hewitt, founder of the Trussville Academy. He attended Berry High School, graduating in 1970.

McRae became interested in art and antiquities. He studied anthropology and developed a specialty in Pre-Columbian art. At his gallery, which was also his home, he showcased such works alongside fine art and antiques, as well as contemporary artist-made jewelry. McRae was also involved in the work of the Five Points South Merchants Association and the Cobb Lane Association to secure funds for renovating Cobb Lane

McRae went missing in late February 1983, last seen in the parking lot outside his business. His body was found on April 17 in a wooded area near the Cahaba River in Helena. He died from a shotgun blast to the face.

Former Birmingham firefighter Gerald Wayne Lawley, a friend of McRae's, was arrested and charged with his murder. Lawley had met McRae through Stuart Cathey, a jewelry maker who had an office in the upstairs of Signature House. Lawley first claimed that he had accidentally shot McRae while aiming at a tossed wine bottle, but no such bottle was recovered from the scene. He pleaded guilty on April 9, 1984 and was sentenced to 25 years in prison. McRae's mother supported Lawley's petition for parole, which he was granted after eight years.

McRae is buried in a family plot at Wilson Chapel Cemetery. His mother had proposed dedicating a public garden in front of their church, Highlands Methodist Church at Five Points Circle, in his memory. With the encouragement of Cecil Roberts and Mayor Richard Arrington (and his assistant Ann Adams), that idea blossomed into a public commission for a sculptural fountain which was dedicated in 1991. Frank Fleming was awarded the commission which became the landmark "Storyteller fountain". As conceived, the central figure in the sculpture represents McRae. Fleming initially proposed a man with the head of a lion, but later changed it to a ram.