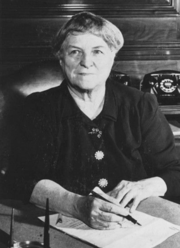 Marie Bankhead Owen (born September 1, 1869 in Noxubee County, Mississippi; died March 1, 1958 in Selma, Dallas County) was a historian who succeeded her husband as the second director of the Alabama Department of Archives and History (ADAH).

Marie was one of five children born to John Hollis Bankhead, a former Alabama state representative and Confederate officer, and the former Tallulah James Brockman at the Bankhead plantation in Mississippi. She attended Ward's Seminary in Nashville, Tennessee. She spent the following winter with her father in Washington D.C. and later voyaged to Europe. She met Thomas McAdory Owen at his graduation from the University of Alabama School of Law in 1887. They were married on April 12, 1893.

Marie Owen was an active member and leader of the Daughters of the American Revolution (DAR) and the United Daughters of the Confederacy (UDC), while her husband was a founding member of the Alabama branch of the Sons of the Revolution. He was active in Democratic Party politics and served as a solicitor and justice of this peace. Soon his efforts to compile materials for a comprehensive history of Alabama caused his law practice to suffer. Through the intervention of his father-in-law, then a U.S. Senator, he was able to secure a position at the Library of Congress in 1894.

Marie accompanied her husband to Washington and assisted him in compiling bibliographies relating to the histories of Alabama and Mississippi. Thomas Owen reorganized the Alabama Historical Society in 1898 and successfully lobbied the Alabama State Legislature to create America's first state Department of Archives and History in 1901. He continued to research his planned history while amassing what became a significant collection of materials, many relating to the state's participation in the Civil War.

Marie contributed articles to Uncle Remus's Magazine and Southern Woman Magazine. In 1911 became was hired as society editor for The Montgomery Advertiser, and continued with the paper as a feature writer and editor until 1917. She was elected president of the League of Southern Writers in 1916 and chaired the National League for Woman's Service from 1916 to 1918. In her civic roles she primarily promoted the teaching of history in schools. She was also active in anti-suffrage activism through the Women's Anti-Ratification League, opposing the 19th amendment to the U.S. Constitution, partially on the grounds that it might lead to future suffrage movements by African Americans. In addition to her non-fiction work, Owen published one novel, Yvonne of Braithwaite A Romance of The Mississippi Delta in 1927.

Along with her personal interest in her family's history, Marie labored to promote the history of Alabama to the general public. She published stories and plays for children commemorating the state's centennial in 1919. After her husband's death at the age of 53 in 1920, she was appointed to succeed him as director of the Alabama Department of Archives and History. With the help of the department's staff and other supporters she completed, edited and oversaw the 1921 publication of his life's work, a 4-volume History of Alabama and Dictionary of Alabama Biography. Owen lost much of her inherited wealth speculating on real estate in Florida during the next decade and relied on her state office, as well as support from her family, for income. She also employed her son Thomas Owen Jr on her staff.

Owen served as Archives director for 35 years, during which time she served on numerous state commissions and authored a primary school textbook, Alabama: A Social and Economic History of the State. Her influence as a cultural leader and public historian firmly ensconced the "Lost Cause" narrative in the state's official histories. Her efforts mischaracterized the state's experience with slavery, misattributed the causes of Civil War, and deliberately mangled the facts regarding the Reconstruction period. At the center of those efforts was the preservation and exhibition of the "First White House of the Confederacy" to portray Southern secession as part of a noble endeavor. As historian for the United Daughters of the Confederacy, she organized the UDC's program to find and challenge "heresy" in public school lessons regarding the Civil War, which her organization wished to be referred to only as "the war between the states." She led efforts to eliminate the "Battle Hymn of the Republic" and Uncle Tom's Cabin from public schools, and lobbied for a "Confederate Catechism" that she commissioned from author Douglas Southall Freeman to be included in history texts and recited out loud in class.

Owen also lobbied to change the Alabama state seal. She regarded the one featuring an American eagle and shield which was approved by the Reconstruction legislature in 1868 as an "abomination," claiming that, "The intention of these aliens was to stamp a defeated people with the insignia of a conquering nation." The replacement, adopted in 1939, featured a map of the state with its river systems prominent. At the same time, Owen also spearheaded the design of an Alabama Coat of Arms, for which she proposed replacing the state's former motto, "Here We Rest", with a phrase taken from Sir William Jones' "Ode in Imitation of Alcaeus," which University of Alabama professor W. B. Saffold translated into Latin as, "Audemus jura nostra defendere." ("We dare defend our rights.")

Owen engaged with President Franklin Roosevelt's "New Deal" programs on behalf of her department. She advised journalist Myrtle Miles in compiling the Federal Writers Project's "WPA Guide to Alabama", engaging in bitter exchanges before endorsing the final publication in 1941. Also, by leveraging the positions of her father and brother in Congress and her persistence with Governor Bibb Graves, she was able to help the state secure WPA funds to construct a $650,000 "World War Memorial Building" opposite the state capitol as the home for the ADAH.

Owen presided over her department from a walnut-paneled office twice as large as the Governor's. In one instance in 1945 she addressed visiting historian John Hope Franklin with a racial slur.

Owen chaired the women's division of the States Rights Democratic Party ("Dixiecrats"), which nominated Strom Thurmond for president at their 1948 convention in Birmingham. She was injured in a vehicle collision and retired from the department in 1955.

Owen died at the Dunn Rest Home in Selma in 1958 and was buried at Greenwood Cemetery in Montgomery. She was inducted into the Alabama Women's Hall of Fame in 1975.