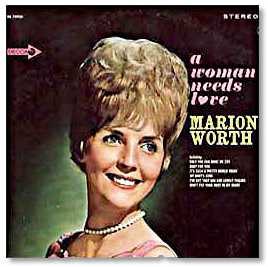 Mary Ann Ward, known professionally as "Lady" Marion Worth (born July 4, 1930 in Birmingham; died December 19, 1999 in Nashville, Tennessee) was a country music singer who starred at the Grand Ole Opry in the late 1960s and early 1970s.

Mary Ann was the daughter of a railroad worker who taught her to play piano. She won a local talent contest for five weeks straight as a 10-year-old, but did not then plan on pursuing a career in music. Instead she prepared for a nursing career at the Paul Hayne School. While there she continued to perform in talent contests, sometimes joined by her sister. A local record company hired her as a bookkeeper and she began to set her sights on singing professionally.

Ward made her radio debut on Dallas, Texas' KLIF-AM. She then returned to Birmingham and worked at WVOK-AM and WAPI-AM. She also appeared on WAPI-TV (Channel 13). During that time she met Happy Wilson, leader of the Golden River Boys. He became quite impressed with her singing and brought her with him to Huntsville to perform on WBHP-AM. He and Slim Lay brought her into the recording studio and scored a hit with her first single.

"Are You Willing, Willie?" was Worth's own composition. It was released as the flip side of a cover of Wilson's "This Heart of Mine" on Huntsville's Cherokee Records in 1959. The track was picked up on radio and peaked at #12 on the country music charts. Her 1960 follow-up on Guyden Records, "That's My Kind of Love" reached #5 and brought her to the attention of Nashville's Jack Stapp, who signed her on to appear on WSM-AM's "Friday Night Frollic" as well as to Columbia Records. Her first Columbia single, "I Think I Know", produced by Don Law and Frank Jones, peaked at #7 in 1961. It was followed by "There'll Always Be Sadness", which peaked at #21. Wilson married her and ran his own music company out of Nashville until Capitol Records hired him to manage their operations there.

Worth's popularity waned for nearly two years until the song "Shake Me I Rattle (Squeeze Me I Cry)" brought her back to the Top 15 on the country charts and also crossed over into Top 50 pop music sales, earning radio play as an easy listening and Christmas tune. Her cover of Ray Price's "Crazy Arms" also reached the Top 20 in 1963 and she joined the regular cast of the Grand Ole Opry before the year was out.

In 1967 Worth signed with Decca Records and provided them with two Top 100 singles, "A Woman Needs Love" (#64, 1967) and "Mama Sez" (#45, 1968). From then on she never reproduced her early success as a recording artist but maintained her popularity on the Opry stage through the mid-1970s. She toured regularly and became one of the first country music stars booked in Carnegie Hall. She also performed regularly in Las Vegas.

As her singing career declined, Worth took an interest in the study of world history. She died in 1999 from complications from emphysema at the Tennessee Christian Medical Center in Nashville, Tennessee.