From Bhamwiki
(Redirected from Marsh Bakers)
Jump to: navigation, search 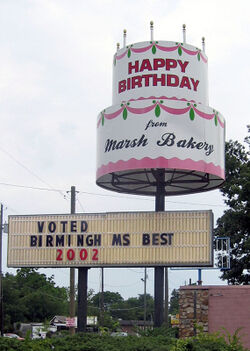 The Marsh Bakery was established by brothers Lloyd and Gail Marsh in the late 1920s as the Floral Park Bakery in eastern Birmingham. In 1932, they renamed the business Marsh Bakery.

By the 1940s, the family purchased the former Graves Building in downtown Birmingham to serve as their primary baking facility, with a bake shop at 1731 4th Avenue North. The business would expand, and Marsh baked goods were available in all local Pizitz stores through the 1950s when the downtown facility closed. A second bake shop opened at 1122 Tuscaloosa Avenue in the 1940s.

The bakery moved into a former Frostop drive-in at 2916 3rd Avenue West (Bessemer Road) in Birmingham's Fairview neighborhood, modifying the root beer can-shaped sign into a two-tiered birthday cake. This location remained open through 2005. The landmark sign was removed in 2011.

The business reopened for a few years at the Trussville Plaza shopping center on Gadsden Highway under the leadership of Lauren Marsh.