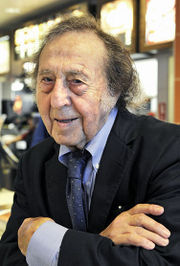 Max Cooper (born c. 1915 in Chicago, Illinois; died August 30, 2015 in Birmingham) was the owner of CLP Corporation, a franchise operator for McDonald's Restaurants, and a Broadway producer. He began his career as a public relations executive, and is credited for popularizing the "Two all-beef patties..." jingle for Big Mac hamburgers.

Cooper has been involved in starting businesses his entire life. He started a bakery as a teenager. After he joined the Army in 1941 he launched an on-base newspaper, and later a radio station. After his discharge he earned money as a comedy writer.

Cooper founded Max Cooper & Associaties press agency in Chicago in 1955. He hired Al Golin and, a year later, when Golin brought Ray Kroc on as a client, made him a partner. They joined with Ebony editor Ben Burns to launch Cooper, Burns & Golin, which continues to operate internationally as "Golin". In 1966, when McDonald's president Harry Sonneborn offered Cooper the opportunity to open restaurant franchises in Birmingham, he jumped at it, moving to Birmingham with his wife, Lorayne.

Cooper partnered with Ed Levins to open three stores. They later brought in a third partner, Ben Pastko. Cooper continued to work at his ad agency and headed the McDonald's account as the company's first ad manager in 1964. In 1959 Cooper traveled to Cuba to help produce a television program on Cuban baseball. He was photographed with Che Guevara and Fidel and Raul Castro at the event. Cooper also adapted Willard Scott's "Ronald McDonald," clown character, used as a mascot by Washington D.C. franchises, for nationwide use.

Cooper recruited Paul Schrage as media buyer for McDonald's and together they engineered a productive 1/4th sponsorship of the Macy's Thanksgiving Day Parade, for which Cooper created a McDonald's All-American High School Marching Band. He went on to take a jingle created for the Big Mac and popularize it nationwide by challenging people to repeat it in less than four second.

Cooper is credited with creating the chain's first Extra Value Meals, which were tested (as "Big Mac and Company" and "Fish, Fry, Drink & Pie") in Birmingham in 1975 before being accepted for worldwide launch. He left Cooper Golin that year to focus on his growing restaurant business.

Cooper began producing stage plays as a hobby. He won Tony Awards for a 2003 revival of "A Long Day's Journey Into Night," and the 2007 production of Spring Awakening. He has also been nominated for The Crucible, A Moon for the Misbegotten, Ragtime, Master Class, and Twelfth Night.