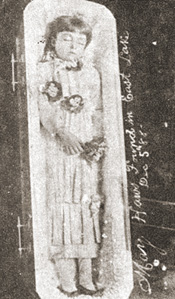 Mamie "May" Hawes (born 1880 in Atlanta, Georgia; died 1888 at East Lake Park) was the eldest daughter of Richard and Emma Hawes.

As an infant, May won a prize in the "baby show" at the old City Hall Park in Atlanta. Eight years later, she and her mother and sisters were murdered by Mr Hawes during the weekend of December 1, 1888. Her body was found floating in East Lake by two boaters on December 4, triggering an investigation that resulted in the discovery of the remains of Mrs Hawes and May's sister, Irene, in Lakeview.

Richard Hawes was captured, convicted of murder, and executed by hanging. Trial testimony from a streetcar conductor indicated that he brought May to the park for the day, but returned home without her. It is believed that he intoxicated her and slipped her into the lake, her body weighted down with railroad irons.

According to area residents, there have been sightings of a little girl playing at the lake's edge, swimming, or slipping below the water at dusk. Called the Child of the Lake or the East Lake Mermaid, the apparition is attributed to May's spirit.