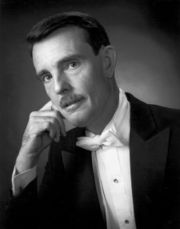 Robinson showed an early aptitude for music. He was accepted into the Birmingham Conservatory of Music at the age of fourteen and studied under Hugh Thomas. Within three years he was performing as a soloist with the Birmingham Symphony Orchestra. He attended Birmingham-Southern College and played organ for St Andrew's Episcopal Church before moving to New York to continue his studies at the Mannes College of Music with Leonard Shure and for private lessons from Rosina Lhévinne and Beveridge Webster. In 1966 he was accepted into Juilliard, where he studied under Vernon de Tar and Anthony Newman. He also studied composition with Vincent Persichetti and was given the Juilliard Faculty Award at the time of his graduation in 1970.

Robinson's thirst for instruction never faded, and he spent years traveling to study under the likes of George Faxon, Russell Saunders, Catharine Crozier, Clarence Watters, Guy Bovet, Montserrat Torrent, and Allen Forte. In particular, the influence of French master Marcel Dupré was significant and Robinson earned high praise from his mentor for recordings of Dupré's contributions to the 20th century organ repertoire.

He also continued to study composition, in particular with Yehudi Wyner and Jacob Druckman. Robinson's musical compositions include a "Concerto for Organ and Orchestra" that was performed by the San Francisco Symphony in 1984 and the "Dismas Variation". Two of his hymn settings were included in the 1982 Hymnal of the Episcopal Church. He was well known as a gifted improvisor.

Robinson was hired as organist for the Park Avenue Synagogue in 1965 and also played at St Mary the Virgin Catholic Church and the Church of the Holy Family (United Nations Parish). He later became music director of Park Avenue Christian Church. He joined the faculty of the Manhattan School of Music beginning in 1984 and became chair of the organ department in 1991. He also taught at his alma mater, Mannes. Late in his career, when Park Avenue Christian moved to a more contemporary worship service, he moved to Holy Trinity Catholic Church.

Robinson resigned due to illness in 2014. He died the next spring. He was survived by his wife, Maria Cristina and his brother, Robert.