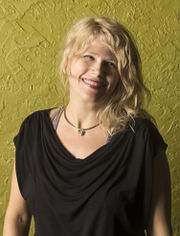 Challiss earned her bachelor of arts at UAB in 1994 and a master of fine arts at the Pennsylvania Academy of the Fine Arts in Philadelphia in 2000. She completed an apprenticeship at the Fabric Workshop and Museum there and was honored by the Leeway Foundation with a "Window of Opportunity Award".

While still working on her MFA, Challiss put on a solo exhibition, "Life Is Beautiful," at Birmingham's Bare Hands Gallery. She was recognized as the "Emerging Artist" for the 2004 Magic City Art Connection and was awarded a fellowship grant by the Alabama State Council on the Arts in 2005. She has had additional solo shows at the Durbin Gallery at Birmingham-Southern College, at the Kentuck Art Gallery in Northport and at galleries in Phildelphia and Portland, Oregon. In 2013 she served a residency at Signal Fire in Portland.

In 2006 Challiss joined her brother, Brad, and boyfriend Brian Teasley in founding Bottletree on 3rd Avenue South. The cafe, bar and venue quickly established itself as a keystone of Birmingham's music scene and helped put the city on the national touring map. Challiss and Teasley married in 2011, but divorced a few years later. Teasley parted ways with Bottletree in 2014. Challiss put the business up for sale in early 2015.