This article is about the professional basketball player and Birmingham Baron. For similarly named people, see Michael Jordan (disambiguation). 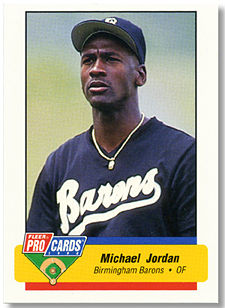 Michael Jeffrey Jordan (born February 17, 1963 in Brooklyn, New York) is considered one of the greatest basketball players of all time. He was the Naismith Player of the Year award while at the University of North Carolina. He was named Rookie of the Year for his first season in the National Basketball Association, was the Most Valuable Player in the league five times, was the Most Valuable Player in the NBA finals for six championships with the Chicago Bulls. He was also named to the NBA's 50th Anniversary All-Time Team in 1996. Jordan retired finally in 2003 with 32,292 points, placing him third on the NBA's all-time scoring list behind Kareem Abdul-Jabbar and Karl Malone.

Jordan is currently a resident of Highland Park, Illinois where his sons are in school. He plays golf avidly and regularly appears in Pro-Am tournaments. He also promotes the "Jordan Brand" of clothing launched by Nike, owns a Superbike motorcycle racing team, and is part-owner of the NBA's Charlotte Bobcats.

Jordan is known in Birmingham for his brief baseball career, which he spent with the 1994 Birmingham Barons.

Jordan announced on October 6, 1993 that he was retiring from the NBA, citing the loss of desire for playing the game. The decision may have been influenced by the death of his father the year before. James Jordan was a devoted baseball fan who had dreams that Michael would become a Major League star.

On February 7, 1994 Jordan signed a free-agent contract with the Chicago White Sox to play professional baseball. The White Sox and Bulls are both owned by Jerry Reinsdorf. On March 31 he was assigned to the Sox' AA affiliate, the Barons. Before reporting he played in the Windy City Classic exhibition game against the Cubs, starting the game and batting 2 for 5 with 2 runs batted in.

Jordan started in right field against the Chattanooga Lookouts for his first game as a Baron on April 8. Wearing the same #45 he wore on his high school jersey, Jordan flied out in his first plate appearance and finished the game 0-3. His first hit came in his 8th plate appearance. He singled off Knoxville's Joe Ganote in the 3rd inning on Sunday April 10. He followed up with another hit later in the game and started a streak of 13 games with a hit. His first run batted in came the next night when he scored Steve Sax with a bases-loaded single. He also recorded his first of a team-high 30 stolen bases in that game.

Jordan's 7th inning double at Huntsville on April 28 broke a 4-4 tie and secured the Barons win. A throwing error on Jordan's ground ball to 3rd on July 6 helped complete a 6-run 9th inning comeback win over the Huntsville. Stars pitcher Steve Wojciechowski had a no hitter going into the final frame.

Jordan's first home run was over the Hoover Met's left field fence (380 feet) in front of record 13,752 fans. The solo homer came off the Carolina Mudcats Kevin Rychel in the bottom of the 8th inning on July 30, the day before his father's birthday. While diving for Joel Wolfe's line drive in 4th inning of the August 12 game against Huntsville, Jordan landed on his shoulder and strained his rotator cuff. He was treated by James Andrews and returned to the field after missing 5 games.

The Barons single-game attendance record was set at 16,247 on Saturday August 27. Jordan went 2-4 and stole a base in the 12-inning 6-3 victory. He finished the season with an 0-4 night on the road at Huntsville.

Over the course of the season Jordan amassed 88 hits, 51 walks and reached base after being hit by a pitch 4 times in 436 at bats for a batting average of .202. He struggled with sliders and had 114 strikouts. He recorded 3 sacrifice flies, 17 doubles, 1 triple, 3 home runs. His 30 stolen bases were second on the team, and he finished with 116 total bases, 46 runs, and 51 runs batted in.

Living up to his reputation as a clutch player, Jordan led the club in RBI with bases loaded (11) and RBI with 2 outs and runners in scoring position (25). He played in 127 games and tied for the Southern League lead of 11 fielding errors. The team finished the season with an overall home attendance of 467,867. The spectacle of the 6 foot 6 NBA All-Star smacking gum in right field and staring down pitchers brought record crowds to the rest of the Southern League's ballparks as well. Journalists from around the world covered Jordan's progress.

After the Barons' season ended, Michael continued playing for a short time with the Scottsdale Scorpions of the Arizona Fall League.

On March 10, 1995 Jordan announced that he was leaving baseball behind and returning to the Bulls. He kept the number 45 until the finals that year, when he led the Bulls to another championship, the first of their second "three-peat" of the 1990s, all with Jordan at shooting guard. He wore his Barons jersey again for the filming of Space Jam (1996), a Warner Brothers film starring Jordan opposite Bugs Bunny and other Looney Tunes characters. Jordan's opening scene in the movie was filmed at the Hoover Met.

Jordan's presence greatly magnified the amount of fan and media attention given the Barons at every stop. That year's Major League Baseball strike made Jordan's story in the minors that much more pressworthy. ESPN televised three games nationally while numerous other outlets made stops at the Hoover Met looking for interviews.

Francona fined players $5 per infraction for using terms like "circus" and "rock star" during the season, enforcing Jordan's desire to be treated like any other teammate. Players and coaches recalled that Jordan worked tirelessly in practice, was friendly and generous with teammates, impatient with ballpark operations, and genuine about his desire to play baseball. There was also resentment among many in the league who believed Jordan was taking a spot away from someone who had done more to earn the position.

During his assignment to the Barons, Jordan lived in a gated estate next to the Founder's Club Course in Greystone. The house was leased by Richard Scrushy for Jordan's use in exchange for a few rounds of golf. Jordan also played in that year's Bruno's Memorial Classic pro-am, paired with Charles Barkley and Lee Trevino. In addition to the Greystone course, Jordan frequented Shoal Creek Golf and Country Club, the Country Club of Birmingham, Oxmoor Valley. Inverness, and Old Overton.

During the year he was occasionally known to participate in pick-up basketball games at Francona's apartment complex. Talking to Barons officials in Los Angeles two years after leaving the sport, Jordan claimed that what he missed most about Birmingham was the grits.

Today, Jordan's #45 jersey hangs in the club's offices and the Hoover Met has a conference/banquet room named after Jordan.