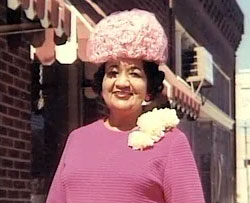 Brown was the daughter of Bennie Brown, a prominent minister. Her mother, Maggie was a teacher and they provided a good education for her. She graduated from Miles Memorial Teachers College at the age of 16 in 1931 and found a teaching job at an elementary school in Birmingham.

In 1936 she met and married S. Edward Gilbert, a pharmacist with a degree from Howard University. The couple moved to Chicago, Illinois, and both enrolled at the Chicago Normal College. They later moved to Des Moines, Iowa where she studied journalism at Drake University and the University of Omaha. Gilbert took a job as an editor for the Sioux City-based Silent Messenger, and she began working in advertising sales there, but soon took over as publisher. She also organized a Booker T. Washington Community Center for neighborhood youth.

In 1937 the couple moved to Omaha to work for a friend's paper. A year later they founded their own publication, the Omaha Star, with the motto "Dedicated to the service of the people that no good cause shall lack a champion and that evil shall not thrive unopposed." The Star became the sole newspaper serving African-Americans in Nebraska. When the couple divorced in 1943, she resumed using her maiden name and took over as sole publisher, and operated the newspaper herself until her death in 1989. Her niece, Marguerita Washington, took over the paper afterwards and continues to publish it.

As publisher, Brown used the paper to advocate for education, community building, the advancement of civil rights efforts, and economic opportunities for African Americans. In addition to employing black journalists and staffers, she funded scholarships and used the paper to publicize achievements by members of the African American community. She also wielded her influence as an advertising outlet and community mouthpiece to convince local businesses to cease discriminatory practices.

During the height of the Civil Rights Movement in Omaha, she provided space for meetings of the DePorres Club after they were kicked off the Creighton University campus. Her paper's coverage of urban riots in the 1960s earned her commendation from the White House, and she was appointed a goodwill ambassador to East Germany by President Lyndon Johnson. In the 1970s she joined the Citizens Coordinating Committee for Civil Liberties.

The Mildred Brown Memorial Strolling Park was dedicated in her honor in May 2008 next to the Omaha Star building. Marguerita Washington established the "Mildred D. Brown Study Center" to fund scholarships for journalism students.