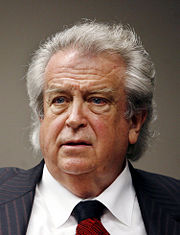 Milton Earl McGregor (born May 1939 in Hartford, Geneva County; died March 25, 2018 in Montgomery) was a gambling promoter and political operative based in Montgomery. He was the president and CEO of the Jefferson County Racing Association and the Macon County Greyhound Park (VictoryLand) in Shorter. He was also part owner of the Southern Springs Nursing Home in Union Springs and of Union Street Partners in Montgomery, and was a member of the Board of Directors of Colonial Bank.

McGregor was the younger brother of Wiregrass political icon Tom McGregor. He was drafted into the Army while a student at Troy University in the late 1950s. He later joined the Army National Guard and enrolled at Auburn University before he was called to active duty during the 1961 Berlin crisis. He spent a year in the Mojave Desert in training drills.

McGregor completed his degree in business administration and finance at Auburn and moved to Huntsville to work in the aerospace industry. When his mother died in 1968 he returned home to manage family affairs and worked as a civilian contractor at Fort Rucker. While there he began dating Patricia Turner, whom he soon married.

McGregor took over the Happy Tymes video arcade chain in the early 1980s and expanded it to several locations across south Alabama and northwest Florida. He opened his first greyhound track, VictoryLand, in Macon County in 1983, shortly after a gambling referendum was passed. He put up his family's land as collateral for the $10-12 million investment. The track was an immediate success.

In 1992 McGregor purchased the Birmingham Race Course from AmSouth Bank and formed the Jefferson County Racing Association to operate it. The purchased included seven parcels totaling over 250 acres surrounding the facility. Birmingham mayor Larry Langford preferred the area as the site of his proposed domed stadium and indicated that McGregor, who happened to be the largest individual contributor to Langford's mayoral campaign, might donate the land for the project. After Langford was convicted of bribery and conspiracy, lawsuits were filed claiming he had won hundreds of jackpots totaling $1.5 million at rigged bingo machines at VictoryLand.

In October 2010 McGregor and ten other figures from business and politics were indicted by federal prosecutors following an investigation of illegal influence in the Alabama Legislature over the issue of legalizing electronic bingo. All the defendants were found not guilty in March 2012.

McGregor died at home in March 2018. He was survived by his wife, Patricia, and two daughters, Kim and Cindy. Their son Steve died of a blood clot in 1980.