This article is about the officer killed in World War I. For other uses of the name, see Mortimer Jordan (disambiguation). 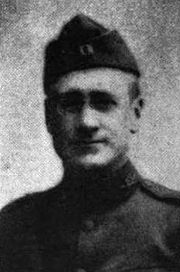 Mortimer Harvie Jordan III (born November 15, 1881 in Birmingham; died August 2, 1918 at Sergy, France) was a physician and the commanding officer of Company K of the Fourth Alabama Infantry, which became the 167th United States Infantry, part of the 42nd (Rainbow) Division of the American Expeditionary Force fighting in France during World War I.

Jordan was the son of Mortimer Jordan Jr and his wife, the former Florence Mudd.

According to the official historian of the 167th, Jordan was well regarded by the men of his company, who reported that he always joined them in the front lines as they moved through battle. He was critically wounded in action near Sergy, France during the Second Battle of the Marne. As he was making his way up a tributary of the Ourcq River to meet with Lieutenant-Colonel Walter E. Bare on July 29, 1918 a German shell landed nearby, injuring him. Thinking he was only "shell-shocked" he spurned medical attention until other wounded men had received care. He was eventually removed to a field hospital where he died from his wounds on August 2.

Jordan is buried at Arlington National Cemetery Arlington, Virginia (his marker there gives July 31 as the date of death). Mortimer Jordan High School in Morris was named in his honor when it was founded in 1920. Behrens' Park in Southside was also renamed in his honor in 1924.