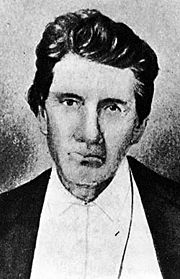 Stroup was the son of Jacob and Elisabetha "Betsy" Stroup and was raised on the family's land on Saylor's Branch near Alexis, North Carolina. The Stroup family had been iron-makers since the 1740s, and Moses learned the craft from his father, entering his apprenticeship at the age of eleven. Two years later his mother died while delivering Moses' brother, Alexander.

In addition to smelting and casting, Stroup learned about mining ores and coal, quarrying limestone, making charcoal, and even manufacturing gunpowder. At fifteen he helped his father build a new furnace at Iron Station, north of Alexis. He fought with his father's company of militiamen in the War of 1812 and returned home in 1814. The father and son moved to King's Creek, York District, South Carolina to build a new, larger furnace. That enterprise was heavily damaged when a flash flood caused a steam explosion. Moses remained to rebuild while Jacob proceeded to design and build the Cowpens Furnace on the former Revolutionary War battlefield.

By 1825 Moses had taken charge of the South Carolina furnaces while his father traded in land and established himself in Georgia. With backing from investor Will Nesbitt, the King's Creek foundry returned to operation and cast cannon for the Nullification Party. That furnace was sold to Wallace McDaniel in 1828.

Stroup married the former Permelia Richards at Cowpens on January 30, 1831 and, the next year, brought her to Spartanburg, South Carolina where he built another foundry, also supplying cannon. Their first child, Susan, was born there in 1834. By 1837 he had rejoined his father at Stamp Creek, Georgia where they operated a bloomery forge. Jacob Stroup was hired to build the Cane Creek Furnace in Calhoun County in the early 1840s. Moses bought out his father's interest in the Georgia furnace. There, with Mark Cooper as partner, the first railroad iron was forged in the South, going into the construction of the Western & Atlantic Railroad between Atlanta and Chattanooga. Stroup sold the forge to Cooper and another partner in 1847.

After his father's death in 1848, Stroup entered Alabama and bought up land in Cherokee County, but kept his family in Georgia. He built the Round Mountain Furnace on the site of William Milner's earlier forge, which went into production in April 1852. He described the operation of that forge in a letter dated March 28, 1855: "The ore used is the red fossiliferous kind. It is taken from the side of the mountain, very near the furnace. The number of hands employed for all purposes connected with the furnace is forty-five. It is over half a mile from the Coosa River, on which is shipped the pig iron to Rome, Georgia."

Stroup sold the Round Mountain furnace to Samuel Marshall that year and joined his son-in-law, John Alexander at the Roupe's Creek furnace owned by Ninian Tannehill. Alexander and Stroup purchased the property in 1857 and commenced a major expansion. With the help of slave labor, he built tramways to the ore fields and quarried sandstone for the towering furnaces. The foundry at Tannehill was outfitted with machinery from Philadelphia and produced plows, axes, firedogs, and hollow ware for sale in the area and iron bars used by blacksmiths. He produced an average of just over 600 pounds of iron per day in 1857 and sought additional investors for further expansion.

In 1859 Stroup completed the oldest of the now-standing furnaces at Tannehill. The invested capital in the project as of the 1860 census was $20,000. Alexander sold the ironworks to William Sanders of Marion in 1862. Stroup stayed on a few months as superintendent before moving to Jefferson County to build the Oxmoor Furnace in 1863.

The Oxmoor Furnace was capable or producing 20 tons of iron per day, most of it going into cannon, balls, railroad spikes and other iron implements for the Confederate cause. Production was kept at peak levels despite a shortage of cash funds. The works were destroyed by soldiers of the 103rd Ohio and 24th Kentucky Regiments under the command of Colonel J. S. Casement on May 22, 1864. In addition to the furnace itself, the offices, mills, and houses were burned to the ground. With his businesses lost and his three sons killed, Stroup retired to Montevallo with his daughters, dying there in 1878. He was buried at Spring Creek Cemetery.