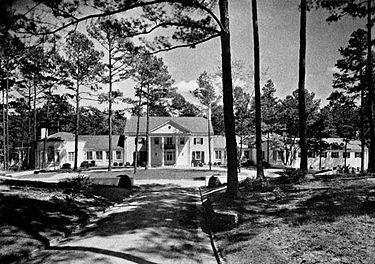 The Mountain Brook Club, formerly Mountain Brook Country Club, is a private country club organized in 1929 and opened in 1930. It is partially encircled by Old Leeds Road at the eastern end of Overbrook Road and Cherokee Road. The club's entrance is at 19 Beechwood Road.

The architect for the clubhouse was Aymar Embury II of New York City, in collaboration with Miller & Martin of Birmingham. It was designed in a Colonial Revival style, meant to resemble a stately country house which had been added on to over generations. The exterior was clad with whitewashed stone and brick. The roof was shingled with "small, rough slates", and the terraces paved with multi-colored slate.

On the interior, the main lounge, overlooking the golf course across a two-story white-pillared porch, was outfitted in an 18th century Georgian style with carved pilasters and frieze on the walls, and mahogany and walnut furniture. The octagonal pavilions on either side enclosed a ballroom and a dining room sized for 125 seats. The silver-trimmed ballroom is adorned with murals painted by Anna Girault Farrar Goldsborough in a style meant to imitate Watteau.

The club's landscape design was created by William Kessler in consultation with Warren Manning of Boston, Massachusetts. The civil engineer was J. H. Glander. The 18-hole Bermuda grass golf course was designed by Donald J. Ross and Associates of Pinehurst, North Carolina. It measures 6,473 yards from the longest tees and plays to a 71 par. The construction contract was awarded to L. E. Ford & Company of Birmingham.

Governance of the club was reorganized on July 1, 1939. The present name was adopted at that time.

Presently the club has 844 members.