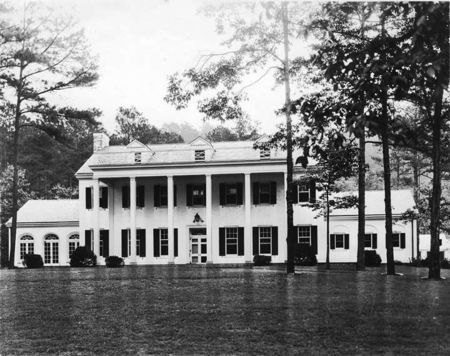 The Mountain Brook Model Estate in the 1930s

The 10-acre property was constructed with "outbuildings and all the appurtenances of an English country seat", including servants' quarters, an auto garage, horse stables, and various other small structures. The 8,700 square foot Greek revival-style mansion was designed by Warren, Knight & Davis of white-painted brick with gabled slate roofs. The main floor consisted of a living room, living hall, stair hall, dining room, breakfast room, kitchen, library, sun parlor and lavatory. Upstairs there were six bedrooms and four baths. Its front and rear-facing double-height porches supported on square posts were modeled after the Potomac River-facing veranda of George Washington's home at Mount Vernon, Virginia. Lewis Ford was the builder.

The estate, originallly used as a guesthouse for Jemison Company, was offered for sale for the unheard of price of $125,000. The buyer was Herbert Tutwiler, who moved his family to Mountain Brook from Niazuma Avenue. He installed a short section of narrow-gauge railroad track in the side yard for a manually-operated toy train.