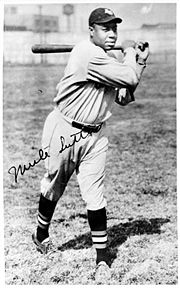 George "Mule" Suttles (born March 31, 1900 in Blocton; died July 5, 1966 in Newark, New Jersey) was a first baseman and outfielder for the Birmingham Black Barons, St Louis Stars, and Newark Eagles of the Negro Leagues. He was elected to the Baseball Hall of Fame in 2006 and to the Alabama Sports Hall of Fame in 2010.

Suttles was born in the then-thriving mining town of Blocton in Bibb County and got his nickname by playing with the Cahaba Coal Company's mules as a boy. He and his brother, Charlie developed an early taste for baseball at Blocton's Park of Four Orders diamond. Charlie's career ended when he broke his leg in a mining accident, but George made his way up through the Industrial Leagues, leaving Alabama at 17 and playing in Louisiana and New York.

Suttles had already played in one game in the pros for the New York Bacharach Giants in 1921 before he made the Black Barons roster in 1923. He played three seasons at Rickwood Field, two at left field and the third at first base. He hit 14 home runs with a .311 batting average in 651 plate appearances as a Black Baron.

In 1926 Suttles took his 50-ounce bat to the St Louis Stars. In that team's hitter-friendly park he starred as a power and percentage hitter. His first season was his best, statistically. He hit for a .432 average with 26 home runs and a 1.000 slugging percentage. He went on to help the Stars win championships in 1928, 1930 and 1931. He led the Negro National League in home runs for two years and in doubles, triples and batting average in individual years. When the Stars disbanded, he played for the Chicago American Giants during their 1933 championship season. He also played at various times for the Baltimore Black Sox, the Detroit Wolves, the Washington Pilots, the Indianapolis ABC's, and the New York Black Yankees. He also played three seasons in the Cuban Leagues.

Suttles finished his career in Newark, part of the team's "Million Dollar Infield" with Dick Seay, Wells and Roy Dandridge. He retired from playing after the 1942 season and managed games for the Eagles for another season. He earned respect as a gentle father figure for younger players.

Suttles shone in the annual East-West All-Star Games, hitting the first home run in the series' history and batting .412 with an .883 slugging percentage over five appearances. Among his many long home runs, one that flew over a 60-foot-tall fence, 500 yards from the plate in center field at Tropicana Park in Havana, Cuba, and landed in the ocean stands out.

Suttles retired in Newark and died of cancer at the age of 66. He is buried at Glendale Cemetery in Bloomfield, New Jersey. He was inducted into the Birmingham Barons Hall of Fame in 2011.