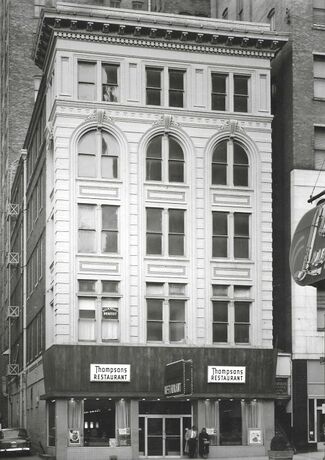 The Nabers, Morrow & Sinnige building in the early 1950s

The Nabers, Morrow & Sinnige building is a five-story brick & terra cotta commercial building located at 109–111 20th Street North in the shadow of the Brown-Marx Building. It was constructed in 1898 for the Nabers, Morrow and Sinnige wholesale druggists, with doctors' offices above.

The architect for the building was Harry Wheelock. The facade is divided into three horizontal layers, with broad spans at the street level topped by a cornice. The next three floors are marked by three tall arched openings, each split by a thin central cast-iron column. The continuous surround frames brick spandrels supported on iron lintels while the remaining wall surfaces are banded with projecting brick courses. The arches are crowned by projecting ornamental keystones. A sill course separates this section from the attic story, with three pairs of rectangular windows with recessed panels between. A deep cornice crowns the roof parapet. This white-glazed facade continues around the 1st Alley North side for the equivalent of one bay, before giving way to un-decorated common brick.

In 1918 the street-level space was rented by Thompson's Cafeteria, which became a 20th Street insitution.

In 1973, in concert with the Birmingham Green campaign to revitalize 20th Street, attorney B. A. Monaghan rehabilitated the building, preserving its original architectural character. Henry Sprott Long & Associates were the architects for the renovations.

The Nabers, Morrow & Sinnige building was added to the National Register of Historic Places on October 22, 1980.