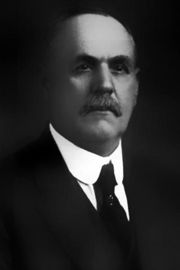 Nathaniel A. Barrett (born January 16, 1861 in Lawrence County) was the Mayor of East Lake before its annexation into Birmingham in 1910. He was later elected to a four year term as President of the Birmingham City Commission from 1917 to 1921.

Barrett was the son of carpenter David B. Barrett by his second wife, Charlotte Wilson Aldridge Barrett. He grew up on the family's Lawrence County farm with five siblings and three half-siblings. He attended the public schools and also a private academy headed by C. G. Lynch, then began studying medicine under C. A. Crow at Moulton before enrolling at the University of Alabama. He continued his education at Vanderbilt University's Department of Medicine in Nashville, Tennessee and was awarded his M.D. in 1886.

Barrett began practicing as a physician in Danville, Morgan County and was elected president of the Morgan County Medical Society. In 1891 he moved to East Lake in the outskirts of Birmingham and built a successful practice. He built a large home on the 7900 block of Underwood Avenue and married the former Annie Pearl Troup on May 5, 1891. He was one of the leaders involved in the move to incorporate East Lake as a municipality, which was affected in 1900, and he served as the city's first mayor. The former East Lake School was named for him in 1909.

Barrett challenged incumbent George Ward for the office of President of the Birmingham City Commission in the 1917 Birmingham municipal election. He was endorsed in that race by the True Americans, an anti-Catholic secret society which took issue with Ward's stance on honoring the Lord's Day. Barrett, a Baptist, had been a leader in the campaign to prohibit the showing of movies on Sundays, which Ward had voted to uphold. During the campaign Barrett labelled Ward, an Episcopalian, as a "tool of the Catholics". Barrett, for his part, was called a "narrow, bigoted, intolerant type, thoroughly incapacitated for the big task he seeks," by the Birmingham News, which had led efforts to put experienced business leaders into office.

Barrett won the election with strong support from the recently annexed suburban communities outside the business district. He famously switched from chewing tobacco to chewing gum as he convened his first meeting of the Board of Commissioners. His first act as Mayor was to fire police chief Martin Eagan, a Catholic, and install Ku Klux Klan official Thomas Shirley in his place. His accomplishments on the Commission included reducing expenditures. In 1920 he supported a move to increase property taxes and reduce merchant's license fees by 20 percent.

During his last year in office, Barrett celebrated the Semicentennial of Birmingham. The week-long event was crowned by his welcoming President Warren G. Harding for an eventful day in Birmingham.

Despite his interest in reforming the Birmingham Police Department, Barrett's administration was accused of being soft on vice as prostitution and gambling flourished, especially during World War I. His entire administration was replaced in the 1921 Birmingham City Commission election by a new slate of reformers headed by D. E. McLendon.