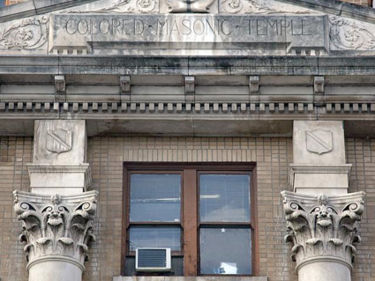 Detail over the entrance to the Colored Masonic Temple

The Colored Masonic Temple (officially the Masonic Temple Building) is an 8-story Renaissance-Revival style building located at 1630 4th Avenue North. It was constructed for the Most Worshipful Prince Hall Grand Lodge, Free & Accepted Masons of Alabama and is a contributing structure to the 4th Avenue Historic District. The building was developed under the leadership of Grand Master Walter Woods and the $657,704 cost was funded entirely by contributions, without taking on any construction debt.

The brick building was designed by the firm of Taylor & Persley (Robert Robinson Taylor and Louis Hudson Persley), and built by Windham Brothers Construction. The cornerstone was laid in 1922 and the building opened in 1924. Its design features an engaged limestone temple front on the south facade. The architrave and frieze of the Corinthian entablature was segmented to make room for the fourth-floor windows. The dentil cornice is continuous, and wraps two sides of the building, dividing the upper and lower sections. The upper part of the facade is gridded off into two and 1 1/2-story sections, separated by pilasters and smaller entablatures.

Throughout its history the building has housed the offices of notable African-American professionals, businesses and organizations, and a popular drug store and soda fountain on the ground floor. Its auditorium, with a capacity of 2,000, was used for meetings, ceremonies, concerts, dances, cotillions, mass meetings and other special events. The Duke Ellington Orchestra and Count Basie's big bands played regularly in the Temple ballroom.

In October 1932 the auditorium hosted an All-Southern Scottsboro and Civil Rights Conference organized by the Communist Party-affiliated International Labor Defense. Speakers included Donald and Alice Burke, Mary Leonard and Ben Fowler. Most of the hundreds of people who came to participate were turned away by a police intimidation.

Three ground floor rooms were used for the Booker T. Washington Library, the first public lending library open to Black citizens in Birmingham. The offices of the NAACP, in this building, were padlocked following the May 26, 1956 order by Montgomery Circuit Judge Walter Jones banning the organization from operating in the state of Alabama.

It is still used for meetings of the the Prince Hall Grand Lodge, but is otherwise underutilized. In January 2009 Main Street Birmingham hosted a workshop at the building to generate ideas for creative redevelopment. A campaign to raise $10-15 million for restoration and expansion of the Temple Building was launched by the Grand Lodge in 2017, shortly after it was made part of the Birmingham Civil Rights National Monument. Schemes for possible expansion discussed at the time included a multi-story parking deck to the west of the Temple with retail spaces on the ground floor.

In November 2019 The Lodge announced that it was working with Historic District Developers (a venture of Henderson of Raleigh-Durham, North Carolina with Direct Invest Development LLC of New York) on a $29 million mixed-use redevelopment of the building. Urban Impact Inc. and the Birmingham Department of Innovation and Economic Opportunity are also participating in the project, which is planned to qualify for Historic Preservation Tax Credit, New Market Tax Credits, and Opportunity Zone tax credits.

Plans for the building include incubator retail, maker-space and office space.