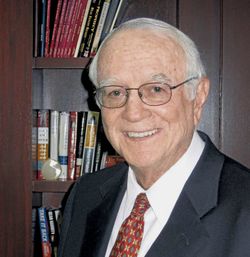 Garry Neil Drummond Sr (born June 8, 1938 in Sipsey; died July 13, 2016 in Birmingham) was the chairman and CEO of the Drummond Company, a privately-owned coal supplier with operations in Alabama and Columbia.

Drummond was the son of Heman Drummond, who founded a small coal company in Drummond Hollow near Jasper in 1935. As a teenager, Garry began working in the mines.

Drummond and his siblings inherited the company when his father died in 1956, but he was not active member of the firm until completing his bachelor's degree in civil engineering at the University of Alabama in 1961. He and his brothers actively expanded the company through new leases and improved equipment, reaching more than $8 million in annual revenues before signing a $100 million ten-year contract to deliver coal to Ataka & Co. steelmakers of Tokyo, Japan in 1969.

Garry Drummond took over as chairman and CEO in 1973 and eventually controlled 100 per cent of the private company. In the same decade the company began acquiring the Aalabama Byproducts Corporation in Tarrant from the Sloss-Sheffield Steel & Iron Company to diversify into foundry coke.

In 1979 an Alabama grand jury indicted Garry and Larry Drummond and another Drummond Company executive, along with an Alabama Power Company executive and several state legislators on charges of bribery and extortion. The case went to trial in 1980, but was dismissed by Judge Frank McFadden before the jury was convened. Alabama Public Service Commission president Juanita McDaniel was not indicted, but resigned during the scandal under pressure from prosecutors.

In the 1980s the company further diversified into real estate investments and development. Also in that decade a subsidiary, Drummond Ltd., conducted exploration of coal mining opportunities outside the United States, resulting in the development of a major open pit mine in La Loma, Columbia in 1995. That project, built in a nation under an ongoing civil war, has been at the center of violent conflicts between labor leaders connected with the Revolutionary Armed Forces of Colombia (FARC) and a right-wing government whose military used land, fuel and and supplies donated by the Drummond Company. Drummond and other executives were named in several lawsuits alleging their role in violent labor suppression at the mine, including the murders of several union leaders, but denied any involvement. One suit, Estate of Rodriquez v. Drummond Company, went to trial in the United States District Court for the Northern District of Alabama in 2007. The jury's verdict held Drummond not liable for the union officials' deaths.

In 2010 Drummond applied for a permit to mine coal on land owned by the University of Alabama on the Black Warrior River at Shepherd Bend. The application has been strongly opposed by environmental groups and the Birmingham Water Works Board. The company withdrew the permit in 2015 amid declining demand for coal.

As sole owner of Drummond Company and its assets, Garry Drummond's net worth has been estimated as exceeding $7 billion at the height of coal export prices, before he sold a 20% stake in the La Loma mine to the Itochu Corporation of Tokyo. In its 2016 report on the "World's Richest People", Fortune magazine estimated Drummond's personal net worth at $600 million, down from $980 million in 2015, which still qualified him as the richest person in Birmingham.

Drummond was a founder of the American Coal Foundation and served as the first chair of the Mining and Reclamation Council of America. He also served as a board member with the National Mining Association and the Alabama Coal Association. He was appointed to the National Coal Council by U.S. Secretary of Energy Donald Hodel in 1984. As chair of the Alabama Health Care Council Drummond was also tapped by Governor Don Siegelman to head his Governor's Commission on Affordable Health Care in 2002.

Drummond was diagnosed with cancer while he was already battling heart disease. He died in July 2016 and was survived by his wife, Peggy and four of his five children. His home was located on Drummond Lake between I-459 and Overton Road west of Grant's Mill Road. He was succeeded as CEO of Drummond Company by Mike Tracy.