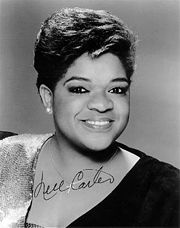 She was born to Horace and Edna May Hardy and had a difficult childhood. She reported being raped at age sixteen (which produced a daughter) and having had three miscarriages. She graduated from Parker High School and then went into show business. She broke into stardom in the musical Ain't Misbehavin', for which she won a Tony Award in 1978. She also won an Emmy for the same role in a televised performance in 1982.

In the late 1970s she took acting roles in Ryan's Hope and The Misadventures of Sheriff Lobo before landing a steady role as housekeeper Nell Harper on the sitcom Gimme a Break!, for which she earned Golden Globe and Emmy nominations. The popular show lasted from 1981 to 1987. She was inducted into the Alabama Walk of Fame in 1989.

After the show ended, Carter's life took a turbulent turn. She married George Krynicki and converted to Judaism in 1982. She attempted suicide in the early 1980s, and entered a drug detoxification facility around 1985. Her brother Bernard died of AIDS in 1989. During this period Carter appeared in low-budget films, TV specials, and on game shows such as Match Game and To Tell the Truth.

In 1992, she had surgery to remove aneurysms. She had divorced Krynicki and married Roger Larocque that same year. In 1993 she divorced Larocque. She declared bankruptcy in 1995 (and again in 2002). In the mid-90's, Carter appeared on Broadway in a revival of Annie as Miss Hannigan.

Carter died from heart disease complicated by diabetes and obesity in 2003. She left barely $200 in her bank account, along with outstanding debts. At the time, she had been rehearsing for a production of A Raisin in the Sun in Long Beach, California and filming the movie, Swing.

Carter is interred in the Hillside Memorial Park Cemetery in Culver City, California. She is survived by her two adopted sons (Joshua and Daniel) and a daughter (Tracy), and by her partner Ann Kaser. [1] Carter's relationship with Kaser was not public knowledge until after her death.