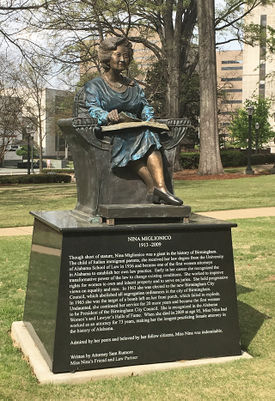 Discussion of creating a permanent monument to Miglionico's importance to the city began during her lifetime. In June 1999, a resolution to dedicate the Birmingham Central Station bus terminal as "Nina Station" was submitted and withdrawn without a vote.

In July 2006, fellow former councilor John Katopodis proposed renaming Caldwell Park for her. Another former councilor, Larry Langford, suggested instead honoring Miglionico by naming a newly proposed literacy center for her. She was inducted into the Birmingham Gallery of Distinguished Citizens in 2008.

In early 2009 the City Council voted unanimously to change the name of Short 20th Street in front of City Hall, to "Nina's Way," but no executive action was taken to mark the change and the council rescinded the resolution. In April of that year the City Council approved a proposal to name the new Birmingham Intermodal Facility for her. The following month, Miglionico died after suffering a fall at her home.

At the urging of a group of citizens, including Miglionico's former partner, Sam Rumore, the council again took up the issue of creating a suitable memorial. A proposal to budget $50,000 to commission a statue was discussed by the council's Budget and Finance Committee in November 2014. Unanimous council approval for an amended $178,000 expenditure to complete the memorial was approved on June 9, 2015