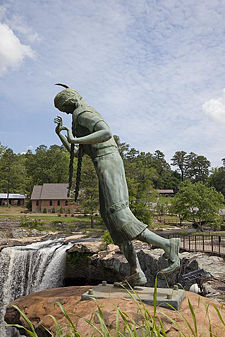 Noccalula is a name attributed to a Cherokee maiden who, according to legend, jumped to her death at what is now called Noccalula Falls. As popularly retold, Noccalula's grieving father renamed the falls for her, and some claim that she still haunts the area below.

Variations of the story are common to hundreds of locales in the United States, and were especially popular in the decades following the Indian Removal, as indigenous peoples became the stuff of stories, and romantic associations for wilderness features carried great narrative power. As Mark Twain observed sardonically in Life on the Mississippi, "There are fifty Lover's Leaps along the Mississippi from whose summit disappointed Indian girls have jumped"1..

The use of "Noccalula," "Nochalula" or "Nahcullola" as a name for the cataract appears as early as the 1860s in print, and was used in parallel with the English "Black Creek Falls". According to ethnologist John Mooney, who corresponded with William Lay in 1919, it is likely that the name is Cherokee (Tsalagi) in origin. A large waterfall in Georgia is called "Amicalola", said to derive from the Tsalagi ᎠᎹᎤᎦᎴᎸᏱ (a-ma u-qwa-le-lv-yi), signifying a place where water (ᎠᎹ or a-ma) tumbles or thunders.2. Another possibility is that the name was invented in modern times to foster an association between the falls and Indian times. One author suggests that a local promoter coined the name from what he baselessly claimed were the Cherokee words for "black" and "falls".3.

A Birmingham Age-Herald column from June 1, 1892 regrets that the Indian name of "Nocalula" is commonly "vulgarized" into "Black Creek". A 1901 travel account renders it as "Knockalula"4.. An official from the Gadsden Chamber of Commerce wrote to Marie Bankhead Owen at the Alabama Department of Archives and History in 1930 seeking information on the name's history, but to no avail.

The legend of a Cherokee woman dying in a fall into the gorge may be documented as early as 1795 when a visitor to Turkey Town was informed that Chief Little Turkey's daughter died nearby in that manner. He recorded that report in 17965.. Another traveler reported a similar local legend in 18216.. An 1851 history confirms that Little Turkey had a young daughter who had been captured by John Sevier at Flint River in January 1789. She was well-treated in captivity until Little Turkey agreed to exchange prisoners at Coosawatie on April 20 of that year7.. It appears that he and his immediate clan moved South to Turkey Town, a string of small settlements on the west bank of the Coosa River between present-day Gadsden and Center. He was visited there in March 1792 by Major David Craig and left after losing the "Battle of Etowah" to Chickamaugas in October of that year. He went on to become Principal Chief of the Cherokee Nation in 1794. His protégé, Pathkiller, remained in Turkey Town as a local chieftain, later accepting the role of Principal Chief himself in 18118..

These figures were incorporated into a literary story in an 1867 article that appeared in the Cherokee Advertiser. The article identified Little Turkey's daughter as "Efoladela" and claimed that she was used as a pawn in a territorial bargain with "Ortus Micco", a chieftain of the neighboring Creek (Muscogee) tribe. Facing the loss of her future with her beloved "Laniska", and fear for her treatment at the hands of Ortus Micco, Efoladela leapt into the gorge and was buried among the rocks below. The writer later reveals that "Laniska" was none other than Pathkiller.9.

It has been claimed that a small limestone slab was found in the gorge, bearing a carved inscription in the Cherokee syllabary (developed by Sequoyah in the 1810s and 1820s), which describes the same legend and identifies the girl as ᎡᎶᎯᏕᎳ (E-lo-hi-de-la). This artifact is reported to have gone to the Gadsden Public Library and later donated to the Gadsden Museum of Art, but its location is currently unknown10..

Reference to the same legend was made by John Witherspoon DuBose in 1888 in a description of the natural beauty of "Nochalula Falls". He ascribed to them "...all the wild beauty that they had in days of yore, when the Indian legend tells us, that the beautiful star, Alivilda, of the Cherokee tribe, leaped over them to avoid going with the Creek chief to his distant wigwam."11.

In the late 1860s an unidentified correspondent for a Virginia newspaper came to the newly-founded city of Gadsden and stayed at Turrentine Inn as a guest of early settler Daniel Turrentine. Whether he heard it from his host, interviewed mulitple local authorities, or merely invented it himself, the correspondent composed a 68-line verse narrative relating the forcible removal of the Indians and including, at the end, the tragedy of a young woman, "Winona", who leaped to her death rather than submit to a "painted band" of "fierce pursuers" who had chased her up a perilous path near the falls.12. The name "Winona" was a commonplace, from the Dakota Sioux word meaning "first born girl", and popularized in several literary works, including Longfellow's "Song of Hiawatha" (where it is spelled "Wenonah"). No mention is made of an impending forced marriage or a hard-hearted father. Some conflict between tribes is portrayed, but they are not named. The poem was given to Turrentine and first published in the Gadsden Times on February 12, 1869, with the title "Black Creek Falls".13.

From there, subsequent retellings added romantic details. The most notable contributor to the story is Anne Mathilde Bilbro, a pianist and composer who was also an accomplished writer. Her first known version, published in verse form in the Gadsden Times of May 7, 1895, included few details amid its lyrical flourishes. Her later prose account, the first in which the girl's name is given as "Noccalula", has been republished, an varying forms, as the "official story" since the early 1900s. She credits the old families of the area as the source of the tale. Her version characterizes the Cherokee tribe as gentle and erudite, contrasting them with the fierce Creeks whose chief offered a rich price for the girl. Noccalula's father, hardened by love of power, promises her hand to the enemy and banishes her true love to the wilderness. In grief, the girl glumly allowed herself to be arrayed in her wedding finery before being pulled away by the sound of the waterfall, and soon succumbing to death as an escape from her troubles. In this version the tragedy re-awakened the father's love and he named the waterfall in her memory.14.

This version, sometimes shortened or otherwise edited, with or without credit given to Bilbro, has been republished countless times in promotional guidebooks, brochures and pamphlets promoting Gadsden tourism. The story was published in a guide map and as a pamphlet with an illustrated cover in 1937 and has been the version promoted by Noccalula Falls Park since its establishment by the city in 1946.

Several later authors have penned versions of the story with some local regard. Cory Chappell authored a version published in The Souvenir in 1891. In John P. Stewart's version, the maiden's true love is a "blue-eyed...fair-haired stranger."8.. Mary Lister's account passed along stories that Noccalula's ghost still inhabits the gorge. Later authors have claimed that the apparition appears in the mist at the base of the falls. Others say that the rainbow often seen in the gorge is a token of the bond between the girl and her favored lover. Some versions add that he returned to the falls, either soon after her death or as an old man, and also jumped. Local storytellers and guides in the park freely improvised new details to heighten the drama or interest.15.. 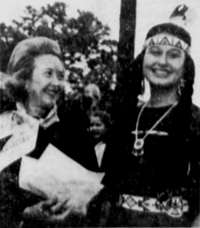 Kay Smith, the model for the statue, attended the dedication in costume and signed autographs as the "real, live Noccalula"

In November 1969 a bronze statue of "Noccalula", modeled by a local teen clad in stereotypical costume and depicted in the act of leaping, was installed at the edge of the gorge. A dedicatory plaque relates Bilbro's basic story with added detail supplying a historical context of "sporadic battles" between Cherokees and Creeks in Etowah County, where a border had been drawn between the two tribes. The plaque also claims that the "Indian sign language...prominently inscribed on the rocks" confirms the location of Noccalula's death16./ It had been said that a Cherokee chief had visited the site and translated the carvings, but there is no record of that investigation.

Sue Allen Davidson and Bruce Stephens included a dramatic retelling of Noccalula's story in the script for their outdoor pageant, "God's Highway: The Coosa River Story", which was performed by the Coosa River Drama Association at the park's amphitheater each summer from 1985 to 1989.

A musical composition, "The Legend of Princess Noccalula" was commissioned from Anniston native John Craton in 2005 by the Dutch ensemble Het Consort. Birmingham filmmaker Steve Pridmore shot scenes in 2009 for a feature film starring Emma-Lillita Hunter as the vengeful ghost of Noccalula.

In 1989 musician Jeffery Jones compiled a detailed overview of available documentation. He constructed the unprovable thesis that the story of an Indian's death at the gorge is a coded retelling of the downfall of the Cherokee tribe and that it is even plausible that the Cherokee maiden's refusal to marry a Creek chieftain is an allegory for the failure of the Cherokees and Creeks to form a military alliance against white encroachment. The same story could have attached itself to any number of cliff ledges and gorges, including Black Creek Falls. He supposes that holdouts from the 1830s removal kept the story alive and related it to their neighbors, from whom it eventually passed into literature, at just the right time for its romantic features to be exaggerated.17.