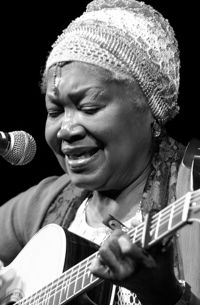 Odetta performing at the 2000 City Stages. Photograph by ILIGHT

Odetta Felious (born Odetta Holmes December 31, 1930 in Birmingham - died December 2, 2008 in New York, New York) was a folk singer, songwriter, guitarist, actress, and human rights activist, often referred to as "The Voice of the Civil Rights Movement." An important figure in the American folk music revival of the 1950s and '60s, she was a formative influence on dozens of artists, including Bob Dylan, Joan Baez, and Janis Joplin.

Odetta was born in Birmingham to steelworker Reuben Holmes and Flora Sanders, a maid. Her father died when she was a child. Her mother re-married, to Zadock Felious and legally changed her daughter's last name. In 1937 the family relocated to Los Angeles, California.

Encouraged by her teachers, Odetta discovered a love of singing. She starred in her high school glee club and performed with the Turnabout Theatre as a teenager. She later earned a degree in music and vocal performance at Los Angeles City College. In 1950 she joined the cast of the west coast touring production of "Finian's Rainbow". While on tour she befriended a group of folk balladeers in San Franscisco. Beginning in 1950, Odetta concentrated on performing folk music and toured successfully at venues like the Blue Angel nightclub in New York, and the Hungry I and the Tin Angel in San Francisco.

She recorded her first album, Odetta and Larry, with Larry Mohr at the Tin Angel. It was released by Fantasy Records in 1954. A solo career followed, with Odetta Sings Ballads and Blues (1956) and At the Gate of Horn (1957). Odetta Sings Folk Songs was one of 1963's best-selling folk albums.

By 1961 Odetta had performed at Carnegie Hall and the Newport Folk Festival. That year, Martin Luther King, Jr anointed her "The Queen of American folk music". In 1959 she performed on television with Harry Belafonte and she starred in the 1963 television special "Dinner with the President". On August 28 of that year she participated in the March on Washington and performed on stage before King's famous "I Have a Dream" speech at the National Mall. 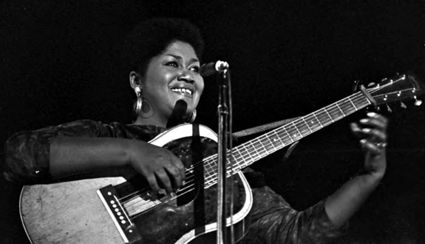 Odetta at Municipal Auditorium in 1965

In October 1965 Odetta performed for an enthusiastic crowd of 1,000 at Municipal Auditorium. She was presented with a key to the city by Birmingham mayor Albert Boutwell that same year.

Over the next decade, Odetta broadened her musical scope, using band arrangements on several albums rather than playing alone, and released music of a more "jazz" style music on albums like Odetta and The Blues (1962) and Odetta (1967). She toured extensively on the folk music circuit from the 1960s to the 1980s, performing with Pete Seeger, Tom Winslow, and many other artists.

Beginning in 1998, she re-focused her energies on recording and touring and her career took on a major resurgence. The new CD To Ella (recorded live and dedicated to her old friend Ella Fitzgerald upon hearing of her passing before walking on stage), was released in 1998 on Silverwolf Records, followed by three new releases on M.C. Records, which cemented a partnership with pianist/arranger/producer Seth Farber and record producer Mark Carpentieri, including: Blues Everywhere I Go, a 2000 Grammy Nominated blues/jazz band tribute album to the great lady blues singers of the 1920s and 1930s; Looking for a Home, a 2002 W.C. Handy Award nominated band tribute to Lead Belly; and the 2007 Grammy-nominated Gonna Let It Shine, a live album of gospel and spiritual songs supported by Seth Farber and The Holmes Brothers. These new recordings and an active world touring schedule created the demand for her guest star appearance on fourteen new albums of other artists (between 1999 and 2006), and the re-release of forty-five old Odetta albums and compilation appearances.

On September 29, 1999, President Bill Clinton presented Odetta with the National Endowment for the Arts' National Medal of Arts. In 2004, Odetta was honored at the Kennedy Center in Washington with the "Visionary Award" along with a tribute performance by Tracy Chapman. In 2005, the Library of Congress in Washington honored her with its "Living Legend Award".

In 2006, Odetta opened shows for jazz vocalist Madeleine Peyroux, and in 2006 she toured the US, Canada, and Europe accompanied by her pianist, which included being presented by the US Embassy in Latvia as the keynote speaker at a Human Rights conference, and also in a concert in the capital city of Riga's historic 1,000 year old Maza Guild Hall. In December, 2006, the Winnipeg Folk Festival honored Odetta with their "Lifetime Achievement Award." In February, 2007, The International Folk Alliance awarded Odetta as "Traditional Folk Artist of the Year." On March 24, 2007 a tribute concert to Odetta was presented in Washington, D.C. at the Rachel Schlessinger Theatre by the World Folk Music Association with live performance and video tributes by Pete Seeger, Madeleine Peyroux, Harry Belafonte, Janis Ian, Sweet Honey In The Rock, Josh White, Jr., Peter, Paul & Mary, Oscar Brand, Tom Rush, Jesse Winchester, Eric Andersen, Wavy Gravy, David Amram, Roger McGuinn, Robert Sims, Carolyn Hester, Donal Leace, Marie Knight, Side By Side, and Laura McGhee.

In 2007, her album Gonna' Let It Shine was nominated for a Grammy, and she completed a major Fall Concert Tour in the "Songs of Spirit" show, which included artists from all over the world. She toured around North America in late 2006 and early 2007 to support this CD.

On January 21, 2008, Odetta was the Keynote Speaker at San Diego's Martin Luther King, Jr. commemoration, followed by concert performances in San Diego, Santa Barbara, Santa Monica, and Mill Valley, in addition to being the sole guest for the evening on PBS-TV's "Tavis Smiley Show."

In 2008, at the age of 77, she launched another national tour, with concerts in Albany, New York and other cities, singing strongly and confidently from a wheelchair.

Odetta was married three times, first to Don Gordon (whose name she took) and then to Gary Shead. Her third marriage, to Iverson "Louisiana Red" Minter, took place in 1977. Minter separated from her in 1983 to pursue his career in Germany.

In November 2008, Odetta's health began to decline and she began receiving treatment in New York. She was slated to perform at Barack Obama's inauguration on January 20, 2009. She died from heart disease at Lenox Hill Hospital in Manhattan on December 2 at 77 years of age. She was survived by an adopted daughter, Michelle Esrick.