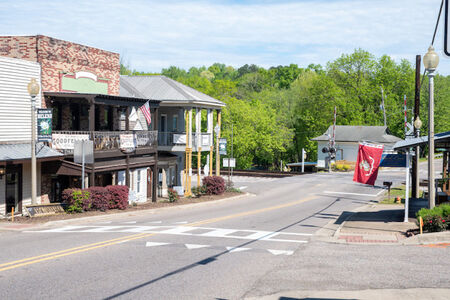 View of Old Town Helena from the Shelby County Reporter.

Old Town Helena is a planned "main street revitalization" on Helena Road in Helena's historic downtown between Helena Elementary School and Buck Creek. The heart of the district is concentrated in a few blocks south of the Louisville & Nashville Railroad tracks.

The plan for redeveloping the district was initiated by Helena mayor Sonny Penhale in the mid 1990s. He had in mind a stretch of restaurants, antique shops, boutiques and other businesses in historic buildings serving as a magnet for visitors and shoppers. He was inspired by towns like Helen, Georgia that made concerted efforts to remake their historic downtowns into visitor attractions.

The city created a master plan in 1996 which included a new zoning classification, "B-4 Business Renaissance" which sought to encourage certain types of visitor-friendly businesses "to advance the economic development of the district yet preserve and enhance its historical and architectural integrity." Proposed businesses locating in the district have to satisfy a design review committee that their plans are in line with the aesthetic appeal of the area. After getting design input from Auburn University Center for Architecture and Urban Studies and the Regional Planning Commission of Greater Birmingham, the city constructed the Helena Amphitheatre near the district as an event center.

Developers Ronnie Morton and Joe Habshey took the lead in moving, restoring and constructing compatible structures and contracting with businesses. Their goal was to reconstruct the 1890s appearance of the main street through town. The district is represented and supported by the Helena Business and Professional Association. In 2006 a section of Helena's Old Town was added to the National Register of Historic Places as the Helena Historic District.

The expected business boom, however, has not yet materialized. Numerous spaces remain vacant. Penhale expects that conditions will improve with the widening of Alabama Highway 261 and the construction of a by-pass that will relieve traffic. Some tenants have complained that the rents are too high for small businesses to afford.

At a hearing on December 20, 2007 the Helena Planning and Zoning Commission approved expanding the zoning district to encompass the entire historic district and relaxing the zoning requirements to allow for offices and residential uses within the B-4 district. The change was passed by the City Council on January 15, 2008, along with a requirement for design review for the placement of banners and signs.

On August 10, 2020 the Helena City Council passed an ordinance designating the Old Town Helena district as an Entertainment District under the state law.

Helena hosts several events in the district, utilizing the amphitheatre: