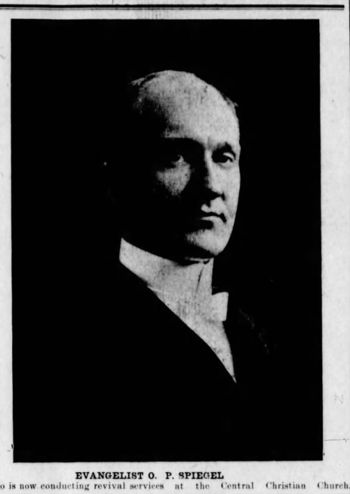 Oscar Pendleton Spiegel (born May 11, 1866 at Piney Grove, near Falkville, Morgan County; died February 6, 1947 in Cullman) was the minister of First Christian Church in Birmingham from 1898 to 1901.

Spiegel was the second son of Samuel and Mary Eliza Spiegel of Piney Grove. As a young man, he entered Mars Hill Academy, a school founded in Florence in 1871 by prominent Disciple evangelist T. B. Larimore. In 1884, he enrolled as a student at College of the Bible, a Disciple seminary in Lexington, Kentucky. Upon graduating in June 1891, he took the pulpit of the Christian Church in Anniston, a position he held for a year.

Spiegel's career and significance, and his work in Birmingham, took place against the background of the emerging division between conservatives and liberals in the churches of the Stone-Campbell Restoration Movement, both nationwide and in Alabama. In Alabama, the decisive issue was the formation of the Alabama Christian Missionary Cooperation (ACMC) at Selma in November 1886. The disagreement over the ACMC pitted a relatively small number of wealthy, progressive churches in the Black Belt counties (along with the Birmingham and Anniston churches) against the majority of Disciple churches in the state, located in the poorer, rural counties of the northern and western parts of the state.

Spiegel's early training and ministry experience occurred among conservative churches in the state who were opposed to the formation of the ACMC. Larimore, his teacher at Mars Hill, was a well-respected leader among the conservatives. By the time he took the pastorate of the Anniston church, Spiegel's own views on the contested issues of the day appeared to have shifted. By the mid-1890s, Spiegel was fully supportive of the ACMC’s work. He served as president of the Cooperation’s state meeting at Selma in 1892 and in Birmingham in 1893. On October 10, 1893, Spiegel married Annie Brawner Widener of Franklin, Kentucky.

Between 1894 and 1897, Spiegel led the ACMC as State Evangelist. He joined with prominent Mississippi progressive Marion Franklin Harmon as co-editor of the Gospel Messenger (published successively out of Jackson, Mississippi; Nashville, Tennessee; and Birmingham). Although its circulation was never very large, the Gospel Messenger sought to counter the influence of the Nashville-based Gospel Advocate, the premier conservative journal among the Disciples, in the South. In 1897 Spiegel published an open letter to Larimore, his former teacher, publicly challenging him to declare himself on the contested issues of the day. This challenge proved an important step toward a full division between conservative and progressive Disciples in Alabama. This division between conservatives (known as the Churches of Christ) and progressives (known as the Christian Church [Disciples of Christ]) persists to this day.

In January 1898, Spiegel took up the pastorate of the First Christian Church in Birmingham, perhaps the most prominent progressive congregation in the state. While there, he set in motion an aggressive program of church planting and maintained a combative relationship with conservatives in Alabama.

First Christian was already a sizable congregation by the time he arrived. About a year after his arrival, Spiegel reported: "We have a church of about 300 members, some of whom live in almost every suburb." Spiegel set in motion the process of constructing a new building for First Christian (completed in 1903).

Spiegel was zealous in evangelistic work in the Birmingham district. He began holding tent meetings in Woodlawn in 1898, perhaps in response to recent conservative activity there. This resulted in the establishment of a mission congregation in Woodlawn in August 1900. Spiegel brought in prominent North Alabama Disciple, Dr A. C. Henry, to minister to the new Woodlawn Christian Church. In September 1901, Spiegel and Henry established the Bessemer Christian Church.

Spiegel also set his sights beyond Birmingham. In the spring of 1899, he was involved in a conference in Montgomery with several progressive leaders that intended to plant a progressive congregation in Montgomery. The conference was unsuccessful, but it did contribute to considerable animosity between Spiegel and prominent Alabama conservative leader J. M. Barnes, as well as with leaders of the Catoma Street church in Montgomery who begged Spiegel not to proceed.

Spiegel revived the Gospel Messenger (publication of which had lapsed in 1898) in Birmingham in December 1900 as the periodical voice of the ACMC.

Upon leaving the pulpit of First Christian Church in early 1902, Spiegel went to Chicago to take the pastorate of the North Side Christian Church in that city. In December of that year he left Chicago for New Orleans, Louisiana. While there, he served as the minister for the Christian Church meeting at the corner of Camp and Melpomene Streets. Spiegel continued to take a close and active interest in the work of the Disciples in Alabama, returning to the state to hold evangelistic meetings and to consult on church matters on several occasions. In the spring of 1904, he announced his resignation from the New Orleans church and returned to Birmingham.

For the next several years, he was involved in evangelistic work in Alabama and throughout the South, serving as the "general southern evangelist for the American Board" of the Christian Church. He settled into a pastorate again in 1911, this time at Central Christian Church (later First Christian) in Montgomery, a position he held until 1925. While in Montgomery, he became active in politics, running for state legislature from Montgomery County in 1918 on the Prohibition ticket, an election that he lost by 67 votes.

The remainder of Spiegel's career was devoted to evangelistic work, and to the work of building up churches in Alabama. He died in February 1947, having just completed a brief interim pastorate at First Christian Church in Anniston. His funeral was performed at Birmingham's First Christian Church by J. Wayne Drash. He was buried in Oak Hill Cemetery.