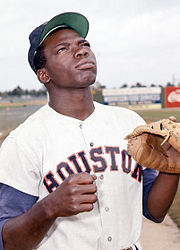 Otis Benjamin Thornton (born June 30, 1945 in Docena) was a right-handed catcher for the 1973 Houston Astros.

Thornton was drafted in the 68th round of the 1965 draft. He caught a total of 4 innings in two games for the club, debuting and finishing his major league career during a July 6 double-header. He struck out twice and hit a sacrifice fly in his three major league at bats. The 6'-1", 186 lb. Thornton wore uniform number 9.